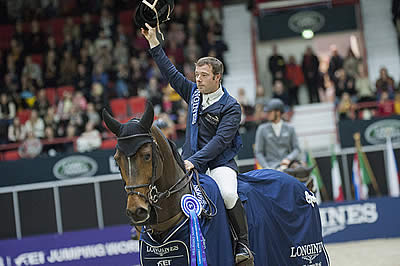 In a competition that had spectators on the edges of their seats from start to finish, the pair pinned Spain’s Sergio Alvarez Moya and his super-talented young horse Jet Run into second place while Belgium’s Celine Schoonbroodt de Azevedo (Cheppetta) and Germany’s Christian Kukuk (Quintino) lined up in third and fourth.

It’s not often that a single fence plays such a major role in the outcome of any competition, but the big blue wall presented by Brazilian course designer, Guilherme Jorge, proved pivotal. The tenth obstacle on the 13-fence track, it was built on a curving line and approached off a tight left-hand turn, and in both rounds it put paid to the chances of some of the best horse-and-rider combinations in the business. Not the 36-year-old Briton and his feisty 16-year-old gelding, however. They took it on with gusto both times out to give Whitaker a career-defining first-ever World Cup win.

The close confines of the Ice Hall in Helsinki wouldn’t be to every horse’s liking, but Catwalk, it seems, is in his element there.

“He just likes arenas like this – he has a lot of power and he can easily jump big fences off a turn, although today to be honest he was unbelievable!” said the son of the legendary John Whitaker who was a back-to-back winner of the coveted FEI World Cup™ trophy with the great Milton back in 1990 and 1991.

One of the most surprising victims of the wall in the first round was World No. 1, Switzerland’s Steve Guerdat partnering Alamo, the horse with which he claimed his third Longines FEI Jumping World Cup™ title last April. The 11-year-old gelding seemed totally taken aback when seeing the big blue edifice as he swung around to it, and he ducked out to the left, jumping it at the second time of asking but collecting five faults which left this duo out of contention. And another rock-solid citizen, Francois Mathy Jr’s Uno de le Roque, also made a big mistake here and then stopped at the next for elimination.

However, a total of nine made it through to the jump-off in which Irishman Eoin McMahon was pathfinder, clipping the top of the wall which was now three from home to set the target at four faults in 40.97 seconds. Next in, Spain’s Moya and his fabulous nine-year-old Jet Run, heroes of the host nation’s victory in the Challenge Cup at the Longines FEI Jumping Nations Cup™ Final in Barcelona (ESP) earlier this month, really put it up to the rest of them with a blistering run that saw them through the timers to take the lead in 39.81 seconds.

Schoonbroodt de Azevedo wasn’t intimidated, throwing down a great run in 40.09, and although the phenomenal Swede, Peder Fredricson, broke the beam in 37.96 there were eight faults on the board when he galloped through the finish with H&M Christian K who was brave to continue after a big mistake at the wall. Whitaker and Catwalk were foot-perfect, looking full of confidence as they galloped home in 38.13 seconds to reset the target and really pile on the pressure. But they weren’t quite home and dried yet because Frenchman Kevin Staut was yet to go and he’s always to be feared against the clock.

But once again it all went wrong at the wall, Staut parting company with For Joy van’t Zorgvliet HDC when they got into a scramble to gasps of disbelief of the crowd. So when Kukuk opted for a safe clear then he was guaranteed fourth place and it was Whitaker’s moment to shine.

Whitaker and Catwalk finished 19th at the Longines FEI Jumping World Cup™ Final in Paris in 2018 and the pair was in flying form in Helsinki, winning the Grand Prix before coming out to steal all the glory once again.

“He hasn’t been over-jumped recently so he was fit enough to go well in both classes here – I just think when he jumps good he’s as good as any!” said the rider who now has his sights set on the 2020 Longines Final in Las Vegas (USA) next April.

So does Alvarez Moya who was delighted with his second-place finish with the nine-year-old Jet Run, a horse he has only had for four months and which he has only competed at 10 shows so far. “I didn’t expect him to be as good and as quick today!” he said. “The more he jumps the better he gets – I would like to go to Stuttgart and try to qualify for the Final before Christmas,” he pointed out.