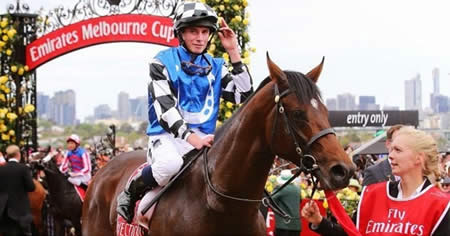 This Photo by Unknown Author is licensed under CC BY-NC-SA.

The 2017 running of the Melbourne Cup was one for the ages. The thrilling finish between winner Rekindling and runner up Johannes Vermeer was the stuff of broadcasters’ dreams. Over 90,000 fans packed the Flemington Racecourse, with the atmosphere simultaneously tense and jubilant during the last few seconds of the race.

However, the real headline stealer was Rekindling’s trainer, 24-year-old Joseph O’Brien. Being a son of a sporting legend like Aiden O’Brien is never an easy thing, but the younger O’Brien now has something that his father’s illustrious resume lacks – a Melbourne Cup victory. All the more remarkable given his young age.

Despite being months away, the excitement has already started building for the 2018 Melbourne Cup. There are already early Melbourne Cup free bets available to use on the race and several major bookmakers have released their odds. The betting picture currently looks like this:

*Selected runners from Ladbrokes. Others available.

There are plenty of takeaways from the 2017 race that can be applied to betting on the 2018 event, however:

Williams is the owner to watch once again

As mentioned, Lloyd Williams now has a record six winners as an owner in the Melbourne Cup. He first tasted victory back in 1981 with Just a Dash. But, crucially for punters, his grip on the Cup has seems to have intensified in recent years. He is the owner of the last two winners, and four out of the last eleven have been in his colours.

Rekindling and Johannes Vermeer could have special rivalry

The finish to the 2017 race was spectacular. Johannes Vermeer can count himself very unlucky not to have crossed the line ahead of Rekindling, which is evident in the fact that they are neck and neck in the betting markets for 2018. However, for the neutral, it will be wonderful to see them renew their rivalry across the season, culminating in another battle for the Melbourne Cup in November. They should both be at the forefront of punters’ minds when it comes to the betting.

Eight out of the top ten finishers in the 2017 Melbourne Cup were foreign-trained. While it is common sense to follow the horses of the O’Briens, there are other ‘tourists’ who are keen to leave their mark on the event. Willie Mullins, who is at the forefront of jumps racing in the UK and Ireland, had three well-placed runners in the race – Max Dynamite (3rd), Thomas Hobson (6th) and Wicklow Brave (10th). Despite spending the majority of his time training horses for national hunt events, Mullins is a driven winner who will be keen to add a Melbourne Cup to his long list of achievements. Keep an eye on him.