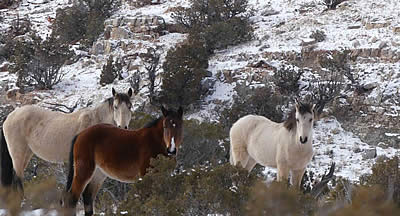 In 1994 I saw my first wild horses in the Pryor Mountains of Montana. A black stallion was eating snow at the base of a red butte. When he noticed my sister who had on a bright white golf jacket, he pranced toward her and snorted. His mares, yearling, and newborn foal responded to his warning, dashing from the shadows of the butte to the safety of nearby hills.

Captivated by the striking stallion named Raven and the spectacular wild horse range they call home; I began documenting their lives in the wild. On May 29, 1995 they brought their newborn colt out of the forest right in front of my camera. I named him Cloud and his life is the subject of three PBS Nature series documentaries.

The assertion that same sex herds of horses in captivity are the equivalent of wild horse families in the wild is ludicrous. A single-sex group of geldings or mares in a pasture bears no resemblance to the intricate and dynamic society of a wild horse herd.

In the wild, the horses make all the decisions, decisions that often make the difference between life and death. Where to go when a storm comes, where to find water in a drought, when to run and when to stand their ground — these are decisions shared by the band stallion and often a strong lead mare. Cloud was lucky to have Sitka for a time, a strong female who could even tell the powerful and impetuous Cloud where to go and when.

I documented Cloud from the day he was born to the time, 20 years later, when he disappeared. His body was never found, but that is not unusual. Many wild horses decide to isolate themselves at the end of their lives. And this is an important word to remember: decide.

Mustangs in captivity do not have the ability to decide much of anything. They are fed, they are restrained in pastures or dirt paddocks, and they are in a same-sex herd of all geldings (castrated males) or all mares.

The horses on my small Colorado ranch have more of a society than any same-sex herd in a BLM corral or sanctuary.  Flint is the leader of my little band which includes Cloud’s birth sisters Mahogany (Flint’s lead mare) and Smokey. The other four geldings, Sky, Sax (Cloud’s youngest brother), BJ, and Swasey, take their lead from Flint and, to a lesser extent, Mahogany. But I would never pretend that they have the social intricacies or intense behaviors of a real wild horse family.

Wild horse social structure is complex and fascinating. It is essential to their survival in the wild. In many ways wild horses are like wolves. There is a dominant male, often a powerful female, and there are subordinate members of the family, including other females. Young males are asked to leave the family by their fathers, and young females get a wandering eye around two years of age. Only bachelor stallions that are skilled fighters and have a strong desire to procreate can win and keep mares.

It is disingenuous of BLM – and others seeking to rid the range of these magnificent animals – to tell the public they can see “wild horses” in “public off-range pastures.” None of the captivating natural behaviors just described are seen among geldings or mares in a man-made, fenced environment.

What the public is seeing are human-influenced, same-sex pastured horses, who bear little resemblance to their friends and families still lucky enough to be running wild and free on our open ranges.