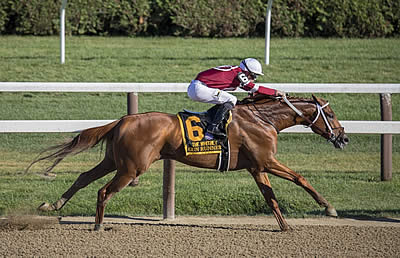 Ever heard of a horse that collapsed after a thirty-minute race? Exercise induced pulmonary hemorrhage could be one of the reasons behind such a tragedy. EIPH is common in most racehorses and those used in equine sports like barrel racing or polo. The term EIPH is a term for an equine who experiences blood moving into the lungs and airways during an extended period of exertion like racing.

Although there is no definitive cause for pulmonary hemorrhage condition, experts believe that specific processes inside the lungs could be the reason for the bleeding. For the horse to get maximum strength and endurance for a race, it requires an increase in blood volume and in the pumping function of the heart. The increased pumping creates pressure within the blood vessels, which in turn raises the horse’s blood pressure. There’s an assumption that the extra pressure could cause the capillaries to burst, allowing hemorrhages to get into the air sacs, which gets into the airways, and further into nasal passages. All these responses are due to the circularity response of the stress exerted during extreme exercise.

Reducing the recurrent episodes is the best way to treat exercise-induced hemorrhage in horses. The more times the bleeding occurs, the higher the chances of scarring which could interfere with the horse’s productivity and performance. A qualified vet may give Lasix, which is a diuretic used before a race, which helps to lower the blood pressure. You might need to allow plenty of rest for your horse and avoid keeping the horse in a stall for many days.

While there isn’t a single treatment for exercise-induced pulmonary hemorrhage, it’s a condition that can be managed. Speak to an experienced vet to find out what other measures could help reduce these recurrences.

What are the Symptoms of EIPH in Horses?

Your horse may exhibit certain symptoms if he has exercise-induced pulmonary hemorrhage. The symptoms may be auditory and visual. Some of the symptoms to watch out for include weird choking sounds after exercising for long periods, mucous tinged with blood, abnormal breathing noises like whistling or roaring, the flow of blood from one or both nostrils, and recurrent swallowing within 30 minutes after finishing a race. You’ll also notice how uneasy and distressed the horse looks.  Also, you might notice some other things that could indicate the presence of exercise-induced pulmonary hemorrhage. You’ll notice that the horse may fall back and may not be able to sustain higher speeds like before. Furthermore, you may notice a hesitation to engage in regular activities. During this time, the horse will display extreme exertion, and you may notice unusual stride rhythms.