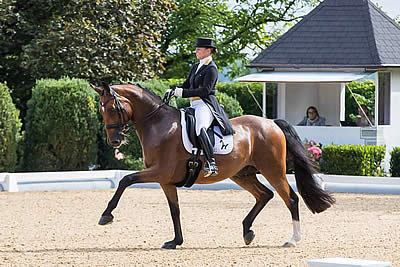 Mariakalnok, Hungary – July 9, 2020 – As the world begins to emerge from a global shutdown caused by the coronavirus pandemic, the international dressage community has slowly returned to the show ring with four FEI-sanctioned events. Taking place in Italy, Hungary, Austria, and Belgium, riders rode down the centerline in much smaller and socially distanced competitions.

In the CDI-W Grand Prix Freestyle, von Bredow-Werndl remained on top of the leaderboard on the 16-year-old KWPN mare with an 84.89%. Hot on her heels, Langehanenberg and Damsey FRH received an 83.865% from the judging panel in their freestyle performance.

At the CDI4* in Achleiten, Austria, six-time Olympic gold medalist Isabell Werth returned to her dominating fashion, picking up four wins out of her four starts in the competition. The competition kicked off July 3 with Werth breaking the show grounds record, earning a 79.5% on Emilio in the CDI4* Grand Prix for the Freestyle and later in the weekend they won the Freestyle with an impressive 86.2%. On Victoria Max-Theurer’s Quantaz, Werth picked up the win in the CDI4* Grand Prix for the Special with a 78.152% as well as earning a personal best of 80.149% in the Grand Prix Special.

“That was a very satisfying start after a longer break from competition,” Werth said. “Dressage shows are very important to stay in the competition rhythm. You need to take stock – especially when you compete with new horses.

“I am very pleased — both horses performed well. For Quantaz it was the first competition in a long time and I was over 80 percent for the first time today. We can still improve a few things, but the basics were perfect. It was a really good test,” Werth said, praising the 10-year-old Brandenburg stallion.

Quantaz’s owner, Victoria Max-Theurer, also had a successful show herself on two of her mounts, racking up multiple second place finishes behind her mentor Werth. In the CDI4* Grand Prix for the Freestyle, she had a great test back from the long pandemic break, earning a 73.565% on her 10-year-old stallion Rockabilly before going on to receive an 81.225% in his debut of his rock-themed Grand Prix Freestyle.

“You don’t get over 80 percent every day! Above all, this freestyle was a premiere for Rocky and me,” Max-Theurer said. “We practiced individual lines but we didn’t have the chance to rehearse the freestyle because we were fully focused on the Grand Prix during our preparation. Our last show was the World Cup in Salzburg in December – that was seven months ago.”

A new horse for her, Abegglen FH NRW, placed second in the CDI4* Grand Prix for the Special with a 76.457% and improved in his Grand Prix Special debut with a score of 77.702%.

“I would like to thank my team, my family, and Isabell Werth, who supports me so incredibly. Daddy would be proud of us,” said the 34-year-old Upper Austrian, whose father and coach Hans Max-Theurer died unexpectedly last year. “It was a great feeling riding the first Special with Abby. I am really happy with this test. Now we have to keep working on the set-up and improve from test to test and from show to show to gain even more confidence. It’s a great challenge to get back into the show rhythm after such a long break.”

After the successful first attempt of a much smaller show under corona restrictions, the manager of the CDI4* in Achleiten, Austria, Elisabeth Max-Theurer, was cautiously optimistic.

“Our safety concept worked; the individual teams did not mingle with each other and paid attention to the distance and hygiene regulations,” Max-Theurer explained. “This is really gratifying and I think that already at the second show at the end of July we will be able to invite about 30 to maybe even 40 riders instead of 15 as well as about 50 horses without endangering anybody. However, we do not know how the pandemic will develop. The most important thing is that everyone stays healthy.”