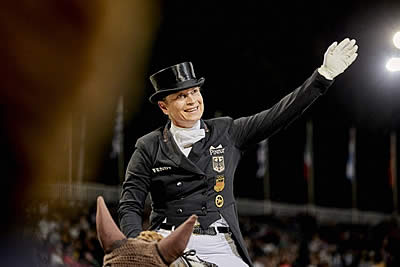 Team-mate Schneider pushes her all the way

In a mighty battle between two of the sport’s true greats, Isabell Werth, the lady recognised as the reigning Queen of international Dressage, won through once again in the Grand Prix Special at the Longines FEI Dressage European Championships 2019 in Rotterdam, The Netherlands.

Two years ago in Gothenburg, Sweden, Werth pinned team-mate Sonke Rothenberger into silver medal spot, and this time around it was her other German compatriot, Dorothee Schneider, who had to settle for second place. But Schneider chased her right to the line with a brilliant performance from Showtime, and was overwhelmed with emotion afterwards.

“This is the greatest day of my life – my first individual medal!” said the double-Olympian. “I had one mistake in the flying changes because I lost a stirrup – I have to talk to my trainer about doing some lunging again! I’ve been riding this horse for 10 years now and he is so amazing. I’m really proud to be sitting in second place tonight behind Isabell!” she said.

She established the lead with just five left to go on a mark of 85.456 but Werth overtook her with another of her show-stopping rides on the mare she most adores, posting the winning score of 86.520.

“I know that with Bella Rose everything is possible and it is up to me to make it happen. The piaffe/passage could not be better than it was tonight; the feeling was outstanding and the atmosphere was really special!” — Isabell Werth (GER)

Bronze went to Cathrine Dufour and Atterupgaards Cassidy, the pair who really put themselves onto centre stage when also third in the Grand Prix Special and Freestyle at the 2017 Europeans. They posted 81.337 just before Schneider came into the ring but, typically modest, the Danish rider didn’t think that was good enough for a podium placing and headed back to the stables with her little chestnut gelding only to get the call-up to return to the arena. And that took a bit of reorganisation.

“I didn’t think I would get a medal so I told my groom to unplait him, so we had to put the plaits back in again – it was a bit of a surprise – but I’m so happy with Cassidy; he’s now 16 but he’s in such great shape!” she said.

Age is but a number to the horses competing this week, and there was huge excitement in the Irish camp when Judy Reynolds and her 17-year-old gelding Vancouver K separated the two remaining members of Tuesday’s gold-medal-winning German team, Jessica von Bredow-Werndl who slotted into fourth with TSF Dalera BB and Sonke Rothenberger and Cosmo in sixth place. Scoring 78.252, Reynolds finished fifth and set her second Irish record score of the week having helped secure an Olympic team qualifying spot for her country with another brilliant performance on Tuesday.

The evening’s competition had a real buzz about it and Judge a C, Susanne Baarup, said the Ground Jury enjoyed every moment of it. “It was an amazing class and also very exciting to judge because a lot of riders had some problems in there. I think as a judge it’s very emotional; we get goosebumps, and we give 9s and 10s and we think my god where do we end here! It’s really just the small details that separate the riders. We talked afterwards and said we want to do it again, we want to see them again, and of course we will do that on Saturday in the Freestyle, and we are really looking forward to it!”