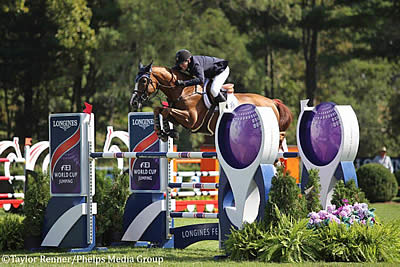 North Salem, N.Y. – Sept. 25, 2018 – As a permanent fixture on the calendars of esteemed riders, trainers, show jumping aficionados, and spectators of all ages, the 2018 American Gold Cup is set to take place Wednesday, Sept. 26 through Sunday, Sept. 30 at the breathtaking Old Salem Farm. The annual event is synonymous with world-class international show jumping competition and is aptly located in the horse-friendly county of Westchester in North Salem, New York.

This year’s American Gold Cup will celebrate its seventh anniversary at this incredible venue and its fourth year as part of the Longines FEI Jumping World Cup™ North American League. As always, the event is set to host an international lineup of the world’s top equestrian athletes as well as offer a wide variety of family friendly activities and luxury shopping on Boutique Row throughout the week.

Some of the most talented horses and athletes from around the world will be vying for the coveted American Gold Cup trophy on Sunday in the $204,000 Longines FEI Jumping World Cup™ New York CSI4*-W, including three members of the NetJets® U.S. Show Jumping Team, who recently won the team gold medal at the FEI World Equestrian Games™ (WEG) in Tryon, North Carolina: McLain Ward, Devin Ryan, and Adrienne Sternlicht. Ryan is also the reigning American Gold Cup champion after winning the title in 2017 on Eddie Blue.

Fans will also have the opportunity to meet some of these competitors at an autograph signing session on Sunday, Sept. 30, following the final awards ceremony for the $204,000 Longines FEI Jumping World Cup™ New York CSI4*-W on the Grand Prix Field.

Prior to the start of Sunday’s highlight event, there will be a special retirement ceremony for one of Ward’s longtime partners, Rothchild, to celebrate his standout career, which included claiming a team bronze medal and fifth place individually at WEG in Normandy, France in 2014 and the individual gold medal and team bronze medal at the 2015 Pan American Games in Toronto, Canada, among many others.

The American Gold Cup will also showcase fun and entertaining events for families and children of all ages. Beginning at 10 a.m. on Saturday and 11 a.m. on Sunday, younger spectators can enjoy face painting, magicians, a petting zoo, pony rides and more in addition to shopping on Boutique Row. New this year, the next generation of equestrians will get their chance in the spotlight on Sunday as they compete in the Leadline division, presented by Rushy Marsh Farm.