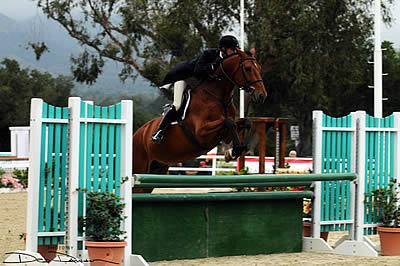 The crisp Spring weather provided a beautiful backdrop Friday and Saturday at the Flintridge Riding Club for the Special Events hosted by the Flintridge La Cañada Guild, raising money and awareness for the Huntington Memorial Hospital at the 94th Annual Flintridge Horse Show.

Friday night provided hours of entertainment with a silent auction, live music and the 14th Annual Wine Tasting, sponsored by Allen Lund. Everyone enjoyed the festivities and were treated to a wonderful evening of competition, which kicked off with the Far West Farms Grand Prix Hunter Derby.

The Far West Farms Grand Prix Hunter Derby was the second Grand Prix Hunter Derby to count towards year end points for the 2015 Show Season. We saw 18 first rounds, with a course of 10 obstacles, designed by John Manning. There were two options in the course, one being the first fence, a vertical option of two different heights and angles to set you up for a tighter turn to fence two. The second option was a roll top with two different heights, which set you up for a more direct track to the final fence, a lovely oxer. Of the 18 first rounds, Jenny Karazissis and Dealmaker and Michael Leon and C Coast Z ended within a few points of one another, an incredible 104 points to Karazissis and 97 points to Leon, initiating a second round.

The second round of the Far West Farms Grand Prix Hunter Derby consisted of a course with seven fences, including the same options available in round one. Karazissis and Leon had beautiful, clean rounds and were very efficient with their time. Karazissis ended with a second score of 87 and Leon received a well-deserved 92. Karazissis and Dealmaker’s overall average came out to a stunning 191 points to win the class and Leon and C Coast Z just behind her in second place with 189 points.

After the conclusion of the exciting Far West Farms Grand Prix Hunter Derby, the entertainment continued with the Annual Tandem Class, presented by Allen Lund. The fun class is no joke, as these teams of three practice their Tandem Jumping well before the event, choose a team name and have a song picked out to represent their team as they execute the course. Ten teams comprised the Tandem Class over three different heights and each team presented the Flintridge La Cañada Guild with a Basket for their Silent Auction to support their efforts in raising money for the Huntington Memorial Hospital. The Tandem Class is an annual favorite to watch at the Annual Flintridge Horse Show and provides a great deal of fun for everyone, with impressive costumes and riding.

The excellent course was designed by John Manning and consisted of 13 obstacles, including two one stride combinations, a large triple that turned into a tight bending line to a combination and a rollback by the in gate leading to a flowing line. Three riders and their horses persevered in having clean first rounds and continued onto the jump-off: Andrew Kocher and Lady Sparkle, Jamie Barge and Luebbo, and at only 14 years old, Delaney Flynn and her mount Quite Quick.

The jump-off was flowing and included a long stretch to gallop to the last fence, our CWD vertical. The riders and spectators alike enjoyed the course and the exciting finish. Andrew Kocher and Lady Sparkle were victorious in managing a double clean round in a time of 35.903 to win the class and Jamie Barge and Luebbo were just off the pace of Andrew and Lady Sparkle, coming in second place with a time of 37.840. Delaney Flynn and Quite Quick were just that, quite quick with the fastest jump off time of 32.412, but unfortunately had one rail, giving them four faults in the jump off, landing them in third place.

It was a wonderful evening supporting the Flintridge La Cañada Guild, with great competition in the Ralph Suarez Grand Prix, Presented by Land Rover of Pasadena.

“The whole weekend’s event was a huge success and we’re so happy to support the Flintridge La Cañada Guild,” said Dale Harvey of West Palms Events. “The 94th Annual Flintridge Horse Show has always been a wonderful event to be a part of and we are looking forward to the success of the show for years to come. Thank you to Ralph Suarez and Land Rover of Pasadena for their support.”

Congratulations to all the riders and horses and a big thank you to the Flintridge La Cañada Guild. Thank you to all our supportive sponsors, riders, owners and staff who make all of our events possible. Stay up to date on all our exciting events and the 2015 show season by visiting our website and following us on Facebook.