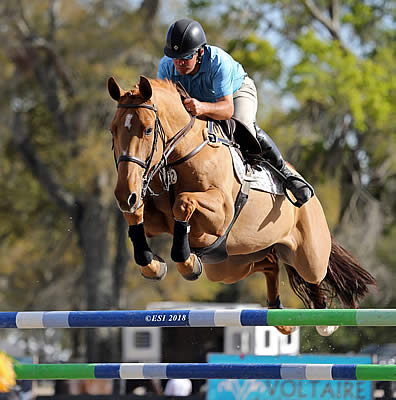 Feature classes during Week VIII of the HITS Ocala Winter Circuit included several repeat winners and introduced some new riders to the victory circle as well. With two more weeks to finish the season, competition is heating up for riders qualifying for the Great American $1 Million Grand Prix and riders vying for the Horseware Ireland Grand Circuit Champion and Tack Shack of Ocala Second-Half Circuit Champion award.

The $10,000 1.35m Classic took place on Saturday, with a very competitive round-two. Andrade continued his winning streak, taking first, third, and fifth places aboard QUILINA VD LAARSEHEIDE Z, CORTINA 168, and TUPAC VAN DE VROMBAUTSHOEVE Z and jump-off times of 36.715, 37.026, and 37.314. Goldman and CENTURION B were the second place finishers with a jump-off time of 36.908 while Dorothy Douglas came in fourth place aboard MTM QUESTRO with a jump-off time of 37.280.

Sunday afternoon, international riders gathered in the Grand Prix ring at HITS Post Time Farm for the $50,000 Purina Animal Nutrition Grand Prix. The crowd gathered for what would end up being one of the most exciting Grand Prix so far this winter. Riders signified that they would donate 10% of their prize money to Marion County Therapeutic Riding Association, by riding with a blue ribbon tied around their arm, making their rides even more special.  It was a tricky round one, with eleven riders returning for the jump-off.

Week VIII was an important one for the Hunters as it was World Championship Hunter Rider week. Riders had the opportunity to show in the Ocala Horse Properties Stadium for many classes this week.