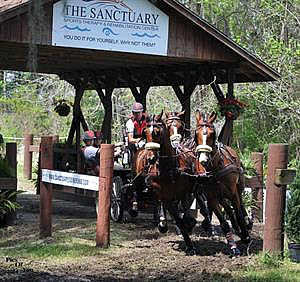 Ocala, Fla. – A warm, sunny morning at Live Oak International set the stage for the USEF National Four-in-Hand Championship sponsored by Ariat. The competitors had a large undertaking guiding their teams of horses through the seven-obstacle marathon course designed by Hartmut Kaufmann of Germany. The Ocala, Fla. venue saw a huge turnout of spectators present to see an exciting day of competition. Chester Weber maintained his lead in the Wellness being held in conjunction with the championship.

Weber (Ocala, Fla.) remained in top form throughout the marathon phase adding 81.31 penalties to his dressage score of 35.02 to sit in first place with a score of 116.33. He expertly drove his and Jane Clark’s team of Royal Dutch Warmblood geldings through the obstacles, having the quickest times of the day for the Four-in-Hand competitors.

“The horses were like music today. It was fantastic! It felt like I was a conductor sitting behind them. Everything was light, nice,” said Weber. “It was really quite warm for an end-of-March day in Ocala. It was 80 degrees.” However, the team didn’t seem fazed by the warm conditions and performed as usual.

“The crowd was fantastic! Every time I went out of an obstacle they got louder,” Weber commented about the phenomenal turnout. “It had a really nice feel, a real European [competition] feel. It was really nice. You had the feeling that the spectators were really enthusiastic about what was going on. The horses couldn’t have been better; they all showed up at a national championship like they were supposed to.”

Misdee Wrigley-Miller (Lakewood Ranch, Fla.) lies in Reserve Champion position after tackling the challenging marathon course. She and her team of Dutch Warmblood geldings struggled at times but finished strongly. After earning a dressage score of 51.97 and 270.57 penalty points on Saturday, Wrigley-Miller sits in second place in the national championship heading into Sunday’s cones phase with a score of 322.54.

In the FEI Four-in-Hand Horse division, Darryl Billing of Canada moved up to second place with his team. After earning 63.59 in the dressage phase and finishing second in the marathon phase with a total of 153.23 penalty points, he is in second place with a score of 322.54 going into the last day of competition.

Championship competition concludes Sunday with the cones phase beginning at 9:00am ET.

Anyone interested may watch the cones phase live on the USEF Network presented by SmartPak. USEFNetwork.com will be live streaming the driving cones phases on Sunday beginning at 9:00am ET. Live Oak International also hosts a CSI 2* jumping competition and USEF Network coverage will include Sunday’s $34,000 Winning Round CSI 2*at 2:30pm ET. On-demand video footage of the driving marathon and Saturday’s jumping class, the $50,000 CSI 2*-W Live Oak International Grand Prix will be available shortly on USEFNetwork.com.

Suzy Stafford (Wilmington, Del.) remains in the lead in the FEI Single Horse division, which is also serving as the Selection Trial for the 2014 FEI World Driving Championships for Singles being held September 25-28 in Izsak, Hungary. Following the marathon phase, she added 65.75 penalty points to her dressage score of 41.09 to sit atop the leaderboard with a score of 106.84.