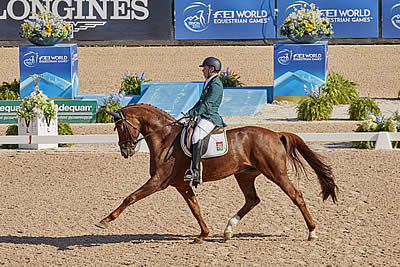 “Some people think they can’t change, but we can all see now that when we are forced to change then we can do it.” This is coming from a man who knows what he’s talking about, 35-year-old Brazilian Dressage and Para-Dressage athlete Rodolpho Riskalla. He’s as disappointed as everyone else that the Tokyo 2020 Olympic and Paralympic Games have been postponed until next summer, and that equestrian sport in general has ground to a standstill due to the pandemic.

But he has learned to take life, and everything it throws at him, in his stride. He knows what it is to have the world turned upside-down and the best-laid plans swept away in an instant. But he also knows what it is to grit your teeth and get back on your feet – in his case two new prosthetic ones – without ever taking your eyes off the prize. And right now his eyes are fully focused on nothing less than a gold medal at the Paralympic Games in Tokyo in 2021.

Rodolpho is sitting beside the “camping car” (I’m imagining it’s a pretty smart RV) he’s sharing with his mother, Rosangele, and sister, Victoria, close to the stables at Haras de Champcueil, about 60km south of Paris, as we begin our chat. He has a long connection with Ecurie Marina Caplain Saint Andre at Champcueil, so when the French lockdown was about to begin he quickly closed up his Paris home and moved his two horses from their usual lodgings at the Polo Club in the heart of the capital city so that he could continue to be close to them in the countryside. “We didn’t know at the time if the Olympics were going ahead this year or not,” he says. “It was chaos!”

He works as an Events Manager for the Paris fashion house Christian Dior, and normally exercises his two competition horses at 7.30am every day before heading to the office. “The Polo Club is normally open to the public, but we were told it would be closing from March 16th (due to the pandemic lockdown) so we brought them here right away. Everything is closed in France until May 11th at least,” he explains.

Adapting to new situations has long been a way of life for Rodolpho who travelled over and back from his family home in Sao Paolo in Brazil to France and elsewhere in Europe during his early teens. “I spent a few months with Mariette Witthages in Belgium, and I went to Germany when I was about 20 and spent two years with Norbert van Laak. Then I went back to Brazil for about five years before deciding to leave again for Europe so I would be close to horses and shows and training, and that brought me here to work with Marina, who I already knew from when I was younger, for about two-and-a-half years as a manager and trainer before I started at Dior,” he says. He’s been based in France ever since.

Rodolpho, whose mother is a Dressage judge and trainer, always showed potential. He claimed gold in the South American Young Rider Dressage Championships in Buenos Aires (BRA) in 2004 and won the Grand Prix Special, finished third in the Grand Prix and fourth in the Freestyle at the CDI3* in Sao Paolo (BRA) in February 2012. He produced a series of strong results in Young Horse classes on the French circuit the following year and was hoping to move his horse, Divertimento, up to Big Tour level, and take a shot at a place at the Rio 2016 Olympic Games, when tragedy struck in the summer of 2015. He had to return urgently to Brazil.

“My dad got sick and he died; it happened very suddenly and by the time I got there he was already gone. I had to look after all the paperwork for that, and I needed to be with my family for a while. But then two weeks later I got sick,” he says. It was bacterial meningitis. “It’s a bit like Coronavirus; some people can get it and are not affected by it, but they can infect someone else. It came out of nowhere. I was good in the morning; I went to see the lawyer and then on to teach one of my friends. In the afternoon I felt like I was getting a flu and I had a high fever, and the next day my mother took me to hospital. I was very sick. They put me in a coma a couple of days later so I could breathe – my heart and everything was shutting down.

“I was in the coma for almost three weeks. Somehow, I managed to survive; they said probably because I was in good health and fit. But my hands and my legs – the extremities – suffered a lot. My (medical) insurance was here in Europe, so Dior managed to fly me back, and I had the amputations in Paris,” he says quite practically.

In June he had been competing at the CDI2* in Compiegne and chasing an Olympic dream. By October he had lost both feet, all the fingers on his right hand and some from the left. And then in November, although he was still very weak, he had to be transferred to a rehabilitation centre much sooner than expected because his hospital bed was needed for victims of the 2015 Paris terrorist attacks.

I ask Rodolpho how he coped with all this, mentally as well as physically.

No time to think

“I didn’t have time to think too much; that’s the good thing, and I was really lucky to have my family and friends with me all the time; that was so important,” he replies. And he’s clearly a rule-breaker. On 2nd January 2016, less than five months after falling ill, he went to the stable where one of the horses he had been riding was kept and was lifted into the saddle. He didn’t have his prosthetics fitted at this stage.

“We could get out every weekend from rehab and yes it was crazy to get on the horse that day, but this moment changed something in my head. I suddenly realised I could manage!

“When you have everything (all your limbs) you think you could never do without them. I was one of those people who would look at a person in a wheelchair thinking I could never be like them.”

He’d lost 30kgs, and with his amputation scars still raw he had to wait until March before his prosthetics could be fitted. However, by the time he was discharged from rehab on 1 May he’d already competed at his first two Para-Dressage shows on a horse borrowed from a friend. His doctors let him sneak out of the rehab facility, saying, “Go! but don’t tell anyone at the hospital!” he tells me with a laugh.

He has now mastered his movement so well that he has a separate set of prosthetics so he can go running a few times a week as well. He’s back competing in both Dressage and Para-Dressage. There’s just no holding this man down.

Having competed up to Grand Prix Dressage level, he found the transition to Para a bit bewildering at first. He says you get away with nothing in a Para test. There are five grades of competition and Rodolpho competes in Grade lV. “There are a lot of transitions and small turns and the judges look at every little thing! When you ride Prix St George or Grand Prix, it’s one movement after another; in Para it’s about straightness, suppleness, contact, good transitions, and it has really improved my horses because you have to be right on point; everything has to be fluid. Sometimes at the higher level, riders produce a flashy half-pass but forget about the basics. I feel now that my PSG horse is much more on the aids,” Rodolpho explains.

It’s hard to believe that he made it to the Paralympics in his home country just four months after leaving hospital in 2016, finishing individually 10th with Warenne. His extraordinary story earned him the FEI “Against All Odds” award that year, and there was hardly a dry eye in the house when he walked to the stage at the Park Tower Hotel in Tokyo to accept his trophy in November. And then, two years later, he claimed individual double-silver in Para-Dressage at the FEI World Equestrian Games™ 2018 in Tryon, USA riding Don Henrico.

He’s had Don Henrico, which is owned by Ann Kathrin Linsenhoff of Gestüt Schafhof, since 2017. “He’s a stallion and sensitive, but right away we got along together. Some horses don’t adapt too well to Para riders; you can’t have a horse that’s too lazy or too big. In my case the disability is my legs and the reins (Rodolpho uses looped reins), but Don Henrico really played the game. He’s super fun!”

Then along came Don Henrico’s brother, the stallion Don Frederic. “I needed a second horse and my sister was working for Ann Kathrin at the time and told me about him. She said he was a better mover and would suit me well.” However, Ann Kathrin wasn’t ready to sell, so Rodolpho continued his search for a back-up ride until, in a phone call with Ann Kathrin’s stepson Matthias Alexander Rath on the way home from last summer’s FEI European Championships in Rotterdam, he got an invitation to come and try the horse. They really clicked and, thanks to Brazilian friend Tania Loeb Wald who purchased him, Don Frederic joined Rodolpho’s team in November 2019.

“It took a few months for him to adapt and be a little more on my aids but he’s really great, a bit less sensitive than Don Henrico who sometimes has a little too much character! We started this year doing both Dressage and Para-Dressage and I took him to Doha (CPEDI3* in February 2020) where he was super and got three really nice scores (winning all three classes).”

Earlier in February Rodolpho competed Don Henrico at the CDI1* in Neumünster (GER), finishing fourth in the Intermediate Freestyle and fifth in the Prix St Georges, both won by German superstar Helen Langehanenberg. In Para-Dressage and in Dressage, the Brazilian rider is very competitive.

The postponement of the Tokyo 2020 Olympic and Paralympic Games to summer 2021 means he has even more time to really cement his partnership with Don Frederic. “So I’m in the lucky position of having two championship horses and now we don’t want to just go to Tokyo for a medal – we want gold!” he says with another laugh.

But I know it’s not a joke. This is a man with colossal inner strength and steely determination. I can sense he’s grinning when he confirms, “Yes, I always want more. I want to win; I want to be better. I’ve always been like that! That’s how I got through what I’ve been through because I was able to adapt. Adaptability is the key word, and pushing your own boundaries a bit. We all have more strength than we think we have!” he insists.

As we conclude our time together I ask him if he has a message for people worried about the instability in the world right now due the pandemic, and he replies, “It’s not an easy time for anyone because we don’t know what the future holds. We need to get past this and we’ll get there, but we can’t rush time and we’ve got to be patient.”

He concludes, “If there is one thing I have learned from my own experience over the last few years, it is that when people care about each other, then everything is easier.”