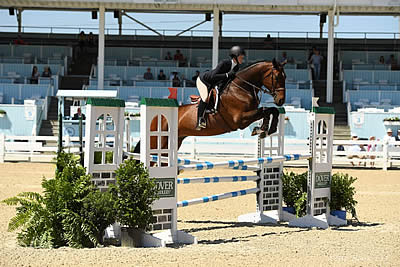 Daisy Farish and Capital Hamilton competing at the Devon Horse Show this spring. Photo by The Book.

Washington, D.C. – With four months remaining before the 60th anniversary Washington International Horse Show (WIHS), running October 23-28 at Capital One Arena in downtown Washington, D.C., top spots in the championship event rankings have been changing hands during spring competition from coast to coast.

New leaders include Daisy Farish of Lexington, KY for the East Coast and Violet Barnett of San Francisco, CA for the West Coast as anticipation heats up for the Lindsay Maxwell Charitable Fund WIHS Equitation Finals. Additionally, after five months of qualifying, both Lauren McCaulley of Lake Charles, IL aboard Umano de la Ruche and Lindsey Tomeu of Wellington, FL riding Gold Lux have dominated the jumper ranks each month.

As the summer competition season kicks off, WIHS congratulates all of the top competitors in the WIHS rankings as of June 11, 2018.