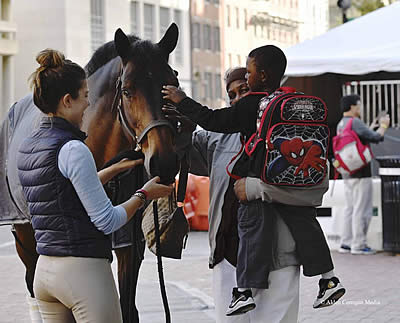 Horses on the streets of Washington D.C. Photo by Alden Corrigan Media.

The Washington International Horse Show left its mark on downtown Washington D.C. yet again in 2018 by hosting a 60th anniversary celebration like no other in the heart of the capital city. Cementing its place in the framework of North American show jumping competition and culture, the 60th anniversary of WIHS was one for the record books.

“This was a 60th celebration better than we could have imagined,” said WIHS President Vicki Lowell. “To be able to showcase top sport year after year for the fans of this event and show jumping in general is fantastic. It was quite an event, and an even better celebration. I can’t wait for the next 60!”

WIHS hopes to keep the history of this show alive and bring new competitors and spectators for another 60 years to come. Text the word HORSE to 50155 and follow the prompts to make a donation to keep horses coming to the city. Every little bit helps.

Top Sport at Capital One Arena

After a $41 million renovation that took place at Capital One Arena over the past year, WIHS welcomed some of the world’s best horses and show jumping athletes to the event with four-time U.S. Olympian Beezie Madden and Breitling LS taking home top call in the $135,000 Longines FEI Jumping World Cup™ Washington, presented by Events DC. WIHS has hosted this prestigious international event for three years as part of the Longines FEI Jumping World Cup™ North American League, which was live streamed worldwide through FEI TV in 2018.

Visiting riders representing Canada, Great Britain, Ireland, and Switzerland rounded out an international field all vying for points for the 2019 Longines FEI Jumping World Cup™ Final, to be held next April in Göteborg, Sweden. Adding to the international flavor of the event, German course designer Olaf Petersen, Jr. set the tracks at WIHS.

“The Lindsay Maxwell Charitable Fund is proud to continue its support of the Washington International Horse Show Equitation Finals,” said Founder Lindsay Maxwell, philanthropist and successful amateur rider. “The Finals are a cherished benchmark for young riders, and it’s an honor to be able to support the development of the next generation of talented equestrians. The incredible quality of the applicants for the 2018 Lindsay Maxwell Charitable Fund WIHS Equitation Grant speaks volumes about the future of our sport.”

Taking home the win in the WIHS Pony Equitation Finals was Samantha Takacs of Oldwick, NJ aboard Storyteller.

In the hunter ranks, the 2018 WIHS Grand Hunter Championship was awarded to Bastogne, ridden by Hunt Tosh and owned by Ceil Wheeler, while Scott Stewart claimed the Leading Hunter Rider Award, presented by Dr. Betsee Parker. For amateurs, the Grand Amateur-Owner 3’6” Hunter Championship was awarded to Catch Me, ridden by Becky Gochman. Catch Me also received the inaugural Technicolor Award, donated by Lindsay Maxwell in memory of her beloved mount Technicolor. Maxwell took home the Grand Amateur-Owner 3’3” Hunter Championship, presented by Ernest and Betty Oare with Belgravia. Legacy and Ashley Vogel were the Grand Junior Hunter champions, while Tessa Downey rode her Anisette to Grand Pony Hunter Champion honors.

Sport, both past and present, was celebrated during WIHS with legendary horseman Joe Fargis being inducted into the WIHS Hall of Fame. A team and individual gold medalist at the 1984 Los Angeles Olympic Games, Fargis boasts five decades of involvement with WIHS as a competitor and judge as well as serving on the show’s Board of Directors. He won the President’s Cup Grand Prix at WIHS in 1984 aboard his gold-medal Olympic partner, Touch of Class.

The equine stars of the Washington International Horse Show immersed the city of Washington, D.C. in horse show culture. With horses cruising into town in Johnson Horse Transportation tractor trailers, being stabled at 7th Street and F Street NW and quite literally walking the streets of the city, the citizens of Washington, D.C. experienced horses first-hand.

Engaging the D.C. community has always been a pillar of WIHS and 2018 was no different. The return of Kids’ Day, presented and supported by WIHS Junior Committee and its presenting sponsor Signature Academics, as well as Breakfast with the Mounted Police hosted by Hotel Monaco and supported by Ride TV, brought horses to the city.

WIHS also embraced the honor and service of the U.S. military with Military Night, presented by Caterpillar Inc., which featured a win for Aaron Vale and Finou 4 in the $25,000 Land Rover Puissance for the third year in a row. Together, they cleared 6’11 ½” to take the victory.

“I’ve always had a love for this class,” said Vale. “It’s about the only one left in the country, so it’s special to come do it, especially in front of such a great crowd.”

The WIHS Military Ticket program, funded by Man O’ War Project in partnership with Columbia University Irving Medical Center, with support from Land Rover, Delta, Caterpillar, Inc., Travelers, and RBC Wealth Management, provided complimentary tickets to members of the military and their families. More than 30,000 tickets have been distributed since the program began in 2009.

What’s a celebration without a little fun? In honor of its 60th anniversary, WIHS invited fans to join them for fierce competition, as well as exhibitions that included famed Australian horseman, entertainer, and bush poet Guy McLean, the WIHS Shetland Pony Steeplechase Championship Series, presented by Charles Owen, a performance by The U.S. Army Herald Trumpets and appearances of the stars of Billy and Blaze, The Movie.

The biggest nod to the WIHS anniversary was historical displays throughout the Capital One Arena concourse and honorary ticket pricing. Matching the ticket price of the inaugural WIHS in 1958, tickets were only $2 on opening day and commemorative show programs were on sale for just $1.

Barn Night, presented by Barn Manager, Charles Owen, The Clothes Horse, The Equiery, The Loft at Meadowbrook, United Metro Golf Cart, Dover Saddlery, and US Equestrian, welcomed young horse enthusiasts to WIHS with contests and prizes. Riders dressed in costume for the $35,000 International Jumper Accumulator Costume Class. Most notably, U.S. Olympic gold medalist McLain Ward honored the Washington Capitals hockey team by dressing as Alex Ovechkin, while The Best Costume Award was given to Andy Kocher, dressed as a pirate.

Taking place during Barn Night in conjunction with the Buck Breast Cancer Benefit, 10 clear rounds over the Buck Breast Cancer jump donated $5,000 to the Capital Breast Care Center thanks to the Tolkan Family. Also presented during Barn Night, the Laura Pickett Award for Excellence presented by Charles Ancona and Vicki Lowell was given to Beatrice VanSant and trainer Ginia Wilbrandt in memory of beloved local trainer Laura Pickett, who lost her battle with breast cancer after a five-year fight.

Whether it was a trip to the Delta Winners Circle after earning a blue ribbon and a box of signature Georgetown Cupcakes in the ring, shopping the WIHS Souvenir Store staffed by the George Washington University Riding Team, placing a bid in the WIHS Silent Auction, meeting a riding idol, or simply soaking in some horses in the city, the 60th Anniversary WIHS was one for the record books for competitors and spectators alike. WIHS will return to Capital One Arena in downtown Washington, D.C. for a 61st season from October 22 through 27, 2019, with the best of show jumping competition, renowned entertainment, and more WIHS champions.