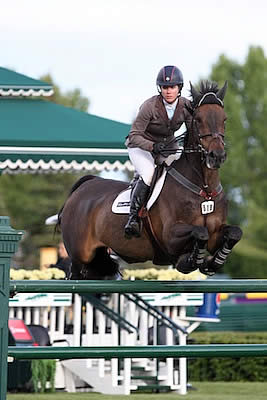 Calgary, AB – June 14, 2013 – Riders at the Spruce Meadows ‘Continental’ Tournament had to deal with incoming rain and storms today, but it didn’t dampen the level of competition. McLain Ward (USA) and Grant Road Partners’ Super Trooper de Ness were fastest in a large field of 75 to win the $33,000 AltaGas Cup 1.45m. Christine McCrea (USA) and Romantovich Take One, owned by Candy Tribble, were best in the $33,000 Scotiabank Cup 1.50m.

In the $33,000 Scotiabank Cup 1.50m competition, the format was changed from jump-off to speed in order to avoid more inclement conditions coming later in the evening. There were 27 entries in the class, and nine of those had no jumping or time faults.

The winner of the class, McCrea and Romantovich Take One, a 13-year-old Dutch Warmblood gelding by Numero Uno x Karandasj, finished in 64.647 seconds. Francois Mathy (BEL) and Polinska des Isles finished second in 66.242 seconds. Third place went to Wilton Porter (USA) and Paloubet, who had a time of 66.323 seconds.

McCrea’s plan to attack the beginning of the course in order to set her up well for the rest worked perfectly. “When I did the first three jumps that fast, I knew I’d be ahead of it,” she recalled. “It meant I didn’t need to be in a hurry for the rest of the course. That was great that it worked out so well in the beginning. My plan was to go as hard as I could go for one, two, three, and then I could tone it down in the middle, then just bring it home clear in the last line. Everything came up great, so it’s nice when that happens!”

She praised the course set by Leopoldo Palacios of Venezuela, and said there were a couple spots that were set to test horse and rider. “The double (combination) with the brown poles are always hard for the horses to see. Luckily my horse has a lot of experience so he handled it well. The skinny is always a bogey jump,” she noted.

Most of the fences at Spruce Meadows are wider than normal, which gives riders an opportunity to use them to set up turns or fit striding in better between jumps. McCrea explained, “You can pick a side and that can save you a lot of time, but it can also help you set up your bend in a line. (For the line to the combination), I came in on the left side and was able to bow into the double. I kept shape in the six (strides) so it wasn’t so choking short. You can play with the angles, for sure.”

With Romantovich Take One’s inherent speed, they were considerably faster than the rest of the field today. He also has a jumping style all his own, and McCrea said that his quirky attitude extends beyond the show ring. “He likes to buck when he’s wild, and he was really, really wild tonight,” she laughed. “He was very excited to show. Off the right lead in the schooling area, when he’s excited, he kicks out. Everyone was like, ‘Whoa. What’s going on?’ But it’s sort of normal for him when he’s feeling good.”

In their second major victory at the 2013 Spruce Meadows Summer Tournaments, Ward and Super Trooper de Ness, an 11-year-old Belgian Warmblood stallion by Vigo D’Arsouilles x Polydor, beat 21 others in the jump-off of the $33,000 AltaGas Cup 1.45m. They finished clear in 41.11 seconds. Second place went to Conor Swail (IRL) and Martha Louise, who finished in 41.47 seconds. Brian Morton (CAN) and Spitfire recorded a time of 42.11 seconds for third place.

Ward said he “lucked out” with the weather on Super Trooper. “It kind of worked out alright for him. We were in the first phase and the weather was beautiful. Then the weather came in and went out again before our jump-off. It certainly helped,” he said.

Ward noted that he did not go as fast as possible with Super Trooper. “Last week I got trying too hard to go too fast and I wasn’t pleased with my performance. This week he felt really good both days,” he said. “You have to watch not to go too fast because he’s always looking and going to the jump, and he’s so quick with his legs. You have to watch that you’re not trying to win by five seconds.”

Believing that the double combination of verticals would be the tricky part of the jump-off course, since it was “off a blind turn” and Super Trooper is “very careful in combinations,” Ward was more aware there. But heading to the last two jumps, he was able to let him go more. “I knew rolling left to the second to last and last (fences), he’d be very quick. I didn’t have to check him too hard to the last (fence) on that long run. I went in thinking I was going to jump the round I want to jump and if it wins, that’s great, and if it’s second or third, I could live with it,” he explained.

Having found Super Trooper almost three years ago in England through Francois Mathy, Ward knew that he would be a top horse, but after a bout of colic and Ward’s injury last winter, it has taken more time than expected to get him to this level. The pair won grand prix competitions at the FTI Consulting Winter Equestrian Festival this winter before traveling to Gothenburg and finishing fifth in the FEI World Cup Finals. This is their second major victory at Spruce Meadows.

“I always loved him,” Ward expressed. “He was always incredibly careful. I’d venture to say he’s the most careful horse I’ve ever ridden. He’s hot and he’s a little bit of an anxious horse. But his character is to fight and his quality is second to none, so if he’s confident and everything is going in the right direction, he’s a hard horse to beat.”

Competition continues tomorrow with the $33,000 Talisman Energy Cup 1.50m in Meadows on the Green, as well as the $10,000 CN ‘Fast Track’ 1.40m Junior/Amateur Derby and the $33,000 McDaniel & Associates 1.45m Derby in the All Canada Ring. For more information on Spruce Meadows and full results, please visit www.sprucemeadows.com.