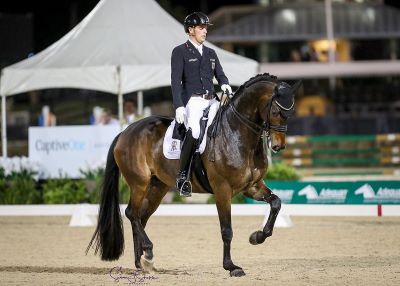 “Bluetooth is getting better and better,” said Wandres of the 12-year-old Oldenburg gelding by Bordeaux. “I get more and more the feeling that I can ride during the test, and he offers me a very good feeling. I’m super happy about his development here in the Wellington season. For him the season is finished now, and he has a few more weeks here to rest a little bit and enjoy the Florida sun before he goes home. Then we are looking forward and trying to take these things which we achieved and developed here together with us to Europe.”

Second-placed Vanommeslaghe was pleased with her conclusion to the five-star week with Edison, the 13-year-old KWPN gelding by Glock’s Johnson TN that she rode to a freestyle victory at AGDF 5.

Third-placed Matute Guimón relished the opportunity to ride in the atmospheric jumping arena with Quantico, his 2018 FEI World Equestrian Games mount, as well as in the class with his sister Paula.

Lyle and Salvino Are Unbeatable

Adrienne Lyle (USA) and Salvino made it two wins from two starts in AGDF 7 when claiming the Grand Prix Special CDI5*, presented by Havensafe Farm. The 15-year-old stallion by Sandro Hit — part of the silver medal-winning USA team at the Tokyo Olympics — posted 79.511%, with a high score of 81.489% from judge Monique Peutz-Vegter.