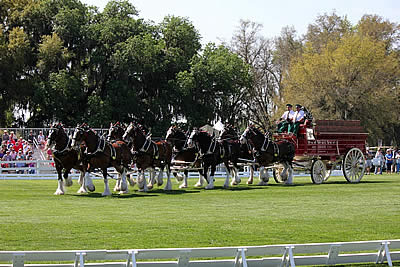 The Budweiser Clydesdales during Thursday’s performance at the 2014 Live Oak International. (Photo courtesy of JRPR)

Ocala, FL (March 20, 2014) – Live from the Live Oak International, tune your radio dial in to Friday and Saturday morning broadcasts bringing Ocala the most interesting characters and champions competing this weekend at Florida horse country’s most prestigious annual tradition.

Wake up with some of the most famous horses and horsemen in the world as Ocala’s favorite morning radio hosts take you behind the scenes with the competition, talk with its defending champions, and learn about the horses, athletes and local volunteers who make Live Oak International one of the most important Ocala events of the year.