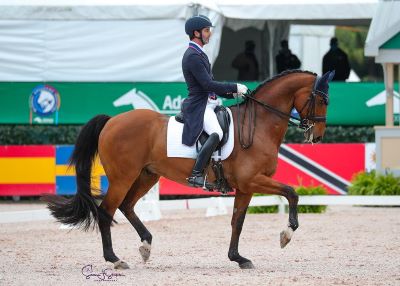 Wellington, FL – March 6, 2021 – The Adequan® Global Dressage Festival continued on Saturday, March 6, marking another top placing this week for the USA’s Nick Wagman and Don John in the FEI Grand Prix Special CDI3*, presented by The Dutta Corp. Wagman and Don John, Beverly Jean Gepfer’s 2008 KWPN gelding by Johnson TN, claimed another personal best, this time a 77.319%, which brought tears of joy to the Californian’s eyes after a week of winning performances.

“This one hasn’t sunk in yet,” revealed Wagman. “I think it’s going to take a moment to process this! I was more concerned about the rain all day and then to go and pull off a ride like this is just WOW! A lot of credit goes to him; he really pulled it together, and we didn’t let each other down… or I didn’t let him down; that’s a better way to put it.”

The middle of the class was put on an hour-long hold due to rain, and Wagman explained that “DJ” was hot in warmup, but handled it all like a pro.

Wagman reviewed, “I went in there and DJ was really hot in the warmup and it was a little muddy from the rain, but as soon as I went into that arena, he was just totally with me. I went in and was like, ‘Okay, we got this!’ For me, it’s just about trying to ride a clean test, and actually I think I pushed for a little more brilliance, and that all seemed to kind of fall into place today.”

The pair has been together for several years and began competing internationally together in 2015. Their partnership has had its share of obstacles, but Wagman noted that their journey together means more to him than he could truly comprehend.

“We’ve been through so much,” he expressed. “He’s just so amazing. I’m filled with emotion. We’ve come from first level to this. We have been through the wringer and back. Just when you think you’re back on track, something else happens, so we’ve just had this rollercoaster ride. It could all change tomorrow, but just to know that we really can do it feels amazing.”