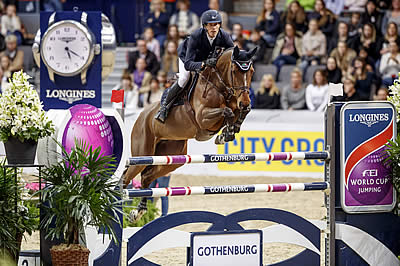 Gothenburg (SWE), 26 February 2017 – Henrik von Eckermann brought the Longines FEI World Cup™ Jumping 2017 Western European League to a fairytale finish on home ground in Gothenburg (SWE) when snatching victory with a breath-taking performance from the 11-year-old mare, Mary Lou. With so many top riders chasing last-minute qualifying points for the Longines Final in Omaha, Nebraska (USA) in four weeks’ time, it was always going to be a mighty battle, and the long trip north proved worthwhile for Dutchmen Maikel van der Vleuten (28) and Leopold Van Asten (40) whose second and third-place finishes have booked their tickets.

Von Eckermann’s chances were possibly obvious, because he had already earned the Leading Rider of the Show award before competition began at the famous Scandinavium Arena.

“It’s been a crazy week; my worst placing was third and I had three second places and three wins – will I ever have a show like this again?!” said the delighted 35-year-old.

From 33 starters there were 12 into the jump-off over Peter Lundstrom’s track, and it was Frenchman, Olivier Robert, who set the standard with Quenelle du Py when clear in 38.52 seconds. Britain’s Robert Smith and Bavi came close to that when breaking the beam in 38.60 for eventual fifth place, but Van der Vleuten really raised the stakes when posting 36.83 with his veteran campaigner VDL Groep Verdi before Van Asten and VDL Groep Zidane crossed the line in 38.06 to slot in behind.

Second-last to go, von Eckermann knew he had to take all the chances, and the crowd nearly raised the roof when he took a risky gallop to the last to cross the line in 36.76 seconds and take the lead. He wasn’t quite sure he’d done enough because French speed ace, Simon Delestre, was last to go, but when the fourth fence fell it was Swedish party-time.

“This is a very emotional win!” said von Eckermann, who worked with German legend, Ludger Beerbaum, for many years before going it alone in a new yard in Bonn (GER) last September. He wasn’t certain that his mare was ready, but when he put her under pressure for the very first time she willingly gave it her all. “She’s still quite green and I can’t take risks on turns with her yet, but however impossible it seems, she always does her best to get across the fences and I’m very grateful to her owner, Karl Schneider, who has kept her for me because she’s something special!” he said.

Tomas Torgersen, Show Director Gothenburg: “It has been a great week with a variety of disciplines, and I’d like to thank Henrik for reminding us why we do this every year!”

John Roche, FEI Jumping Director: “Congratulations to Henrik for his great win and to the horse’s owner Karl Schneider. Our thanks also go to the Organising Committee, to the presenting sponsors ATG and of course to Longines without whom none of this would happen.”

Henrik von Eckermann SWE (1st): “I’m new at running my own business. I have 12 horses in my yard now, and the girls at home have been working extremely hard and the great results I’ve had this week are thanks to them. I’m very happy with fourth position in the final standings; this will be good for my draw at the Final.”

Henrik von Eckermann SWE (1st), when asked about his chances of taking the Longines FEI World Cup™ title in Omaha next month: “No, I don’t think it will be this year; my horse is still very inexperienced. With this horse the first time I jumped her clear and then I rode to win and it all went wrong. So I slowed down again and took time to give her experience; for once in my life I am using my head!”

Henrik von Eckermann SWE (1st), talking about plans for his horses over the coming months: “I’m going to Doha on Wednesday, then to Herning in Denmark with other horses. Mary Lou will go to Paris and then Omaha.”

Peter Lundstrom, course designer: “At first I was worried about so many early clear rounds but I was quite satisfied at the end.”