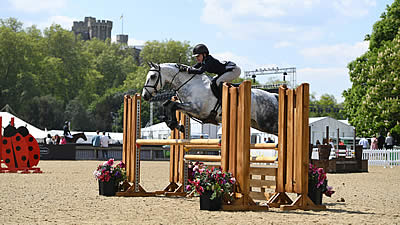 Following the success of Virtual Windsor in May, the organisers of Royal Windsor Horse Show are delighted to announce that the online Show will be returning as a new series with two editions taking place in the Autumn and Winter. The Virtual Windsor Autumn Series 2020 will be live-streamed on 25-27 September, and will feature three disciplines in which riders from all over the world can participate from their own homes.

The Show will comprise 22 Showing classes, alongside new additions in the form of International Pony Club Dressage, a Riding for the Disabled Association class and a specially designed ‘Equitation Jumping’ discipline open to all. In addition, the popular shopping section will be bringing visitors new products and offers, and there will be yard tours and masterclasses with first-class riders.

Leading the charge for Virtual Windsor in September will be the Pony Club Home International Dressage, featuring teams from England, Scotland, Wales, Northern Ireland, and the Republic of Ireland. Previously held at the Royal Windsor Horse Show, the competition pits up-and-coming riders against each other, and this year will be made even more special with live judging and commentary for the audience to enjoy.

Marcus Capel, Pony Club Chief Executive, said: “We are hugely pleased to be able to run our Home International Dressage competition on the Virtual Windsor platform this year. The competition highlights the hard work and talent of our young riders, and we hope that by holding it online we will enable many young riders to enjoy and be inspired by the competition from their own homes.”

Virtual Windsor’s Showing Series returns to your screens, with Chief Judge Nigel Hollings back by popular demand. The May edition of Virtual Windsor saw over 4,000 entries to the Showing coming from as far afield as South Africa, Australia, and New Zealand, included both amateur and professional riders and even Her Majesty The Queen. The Virtual Windsor Autumn Series in September will showcase 26 Showing classes, covering everything from Riding Horses and Hunters, to Show Ponies and Side Saddle, while the Winter Series – planned for later in the year – will have an international flavour including horse breeds from around the world such as Quarter Horses, Iberian Breeds, and Arabians. The classes remain free to enter for all.

Nigel Hollings will be joined on the judging panel for the Autumn Series by Julian White, Anne Leaver, and Pat Pattinson. “I am delighted to be returning as Virtual Windsor’s Chief Judge this September, having hugely enjoyed the May Show,” said Hollings. “The standard of entries was incredibly high at the last event and I really enjoy the Virtual format which gives me the opportunity to share feedback with the audience as I judge. I was particularly impressed with the number of international entries in the May edition. To be a winner at Virtual Windsor against entries from all over the world, you really do have to be the best.”

In addition to International Dressage and Showing, the organisers of the Virtual Windsor Autumn Series 2020 have created a jumping discipline which allows riders from across the globe to compete. Based on Prix Caprilli, Equitation Jumping requires competitors to submit a video showing a short set test, which includes three fences of any kind with one stride between each at any height. Marks are awarded for the rider’s position, use of aids, and straightness and the technique, shape, and impulsion of the horse. Designed to be accessible to all levels of equestrian, the class is open to all and will have a Championship taking place on the Sunday of the Show.

The competition will be judged by professional judge, show jumper, and event rider Julian White, who said, “During these difficult times that we’re all facing I’ve just had the most amazing ray of light shone onto me by being asked to be a judge on the Virtual Windsor Horse Show Series which is just brilliant, I’m so excited. It is a real honour to be asked and I am looking forward to it hugely. So thank you so much, and I’m judging with Nigel Hollings who I was meant to be judging with in South Africa, so that’s also a joy and a double whammy!”

FURTHER ADDITIONS ADDED TO THE LINE-UP

In addition to the competition, a Masterclass will be streamed on each day of the three days of the Show, featuring world-class riders from around the world. Covering topics from Grand Prix Dressage to training tips, riding international courses and the thrills of top competition, the Masterclasses will be available to all through the live stream.

It has been a tough year for many exhibitors, and Virtual Windsor will continue to support tradestands and shops through its Virtual Shopping Village, where visitors will find a full list of shops selling everything equestrian, plus some “Show Week” discounts.

Royal Windsor’s Show Director, Simon Brooks-Ward, said of Virtual Windsor: “We were so thrilled by the response to the first Virtual Windsor that it wasn’t a difficult decision to build a series of events.  Although 2020 has been a challenging year, Virtual Windsor has shown us that the equestrian community has a really positive outlook and will come together to enjoy competition and celebrate equestrianism. I cannot wait to see how the Series fares and to welcome all the international competitors and visitors to the event.”

The Virtual Windsor Autumn Series 2020 will run from 25-27 September 2020, with entries for Showing and Equitation Jumping opening in August and closing in early September. Schedules and rules for each class will be available at virtual.rwhs.co.uk from Friday 10 July.