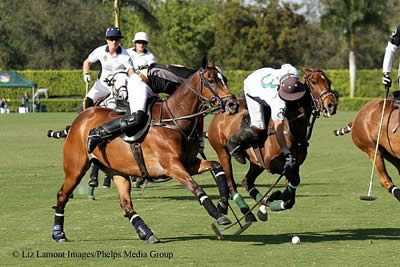 The first chukker started with a penalty shot by Polito Pieres, who easily converted for a goal. He followed up with a long pass to an in-motion Agustin Obregon, who tapped the ball in for a second Villa del Lago goal. After some back-and-forth play, Obregon took off and again drove the ball between the goalposts.

Inaki LaPrida worked through the defenders and made a backshot to score Tonkawa’s first goal. A penalty in the goal mouth cost Villa del Lago a point on a penalty one, making the score 3-2. Jeff Blake hit a backshot to Gonzalo Deltour, who tied the score 3-3 at the end of the first chukker.

The second chukker was as action-packed as the first, with Pieres scoring off a breakaway just seconds into the match. Julian de Lusarreta set up Pieres for a tailshot, a move that was repeated throughout the game as the two powerhouses worked in tandem. Pieres converted his second penalty of the day to make the score 6-3. He then made quick work of the Tonkawa defenders, dodging one after another to score on one of his signature dribbles.

Deltour converted a penalty at the start of the third chukker, making the score 7-4. De Lusarreta gained momentum as the chukker wore on, working through defenders to score and then taking off on a breakaway for back-to-back goals. Pieres ended the third chukker with another point on the board for Villa del Lago, bringing the score to 10-4.

Villa del Lago continued its hot streak in the fourth chukker as Pieres came onto the field with guns blazing. He went wide open in a 180-yard drive to goal and then converted for his ninth goal of the game, making the score 12-4. In the next play LaPrida made a strong defensive move, backing out Pieres’ attempt on goal.

LaPrida followed up by snatching the ball out of the air and shooting a pass to Jeff Hildebrand, who drove it in to make the score 12-5. Deltour wove through strong pressure at midfield, stealing the ball and sending it to Blake for another goal. Deltour continued to ride the wave, making a goal on a chip shot. He then converted a penalty to end the fourth chukker 12-8.

Deltour demonstrated his determination and ball-handling skills in the sixth chukker, tapping in back-to-back goals. Pieres scored off of a breakaway from the throw-in. Blake shot a pass to Deltour to score, ending the match 17-13.

Pieres was happy with how his team handled the competition.

“Luckily in the beginning we scored a lot of goals and took a little bit of an advantage,” he said. “It was a tough but fun game to play.”