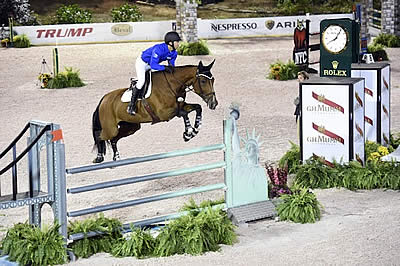 New York, NY – September 19, 2014 – Central Park’s Trump Rink was alight with excitement Friday night as the inaugural Central Park Horse Show (CPHS), presented by Rolex and produced by The Chronicle of the Horse, continued with its second day of show jumping competition under the beautiful New York City skyline. The evening featured a $50,000 “NYC vs. The World” Team Speed Challenge, presented by Donald J. Trump, with a win for Suncast® Corporation’s World Team. Representing his home nation of Ireland, Conor Swail won the competition overall with the leading round aboard Lansdowne.

A $5,000 Junior/Amateur Speed Challenge was held later in the evening with a win for 22-year-old New York based rider Hilary McNerney and Oscar. Kent Farrington, the number 3 ranked rider in the world, guided the winning efforts in both competitions serving as captain of the victorious Suncast World Team as well as training McNerney to her win. The Central Park Horse Show presented by Rolex continues through Sunday, September 21.

Friday’s Speed Challenge featured teams for Land Rover of America NYC with riders representing the home city of New York matched up against international riders representing the Suncast Corporation World Team. Steve Stephens of Palmetto, FL set the track for the competition, which was run in a faults converted speed format. The world team was the winner overall, topping 10 of the 15 match-ups while the team for NYC, captained by Georgina Bloomberg, settled for second.

In addition to team prizes, the top eight individual riders shared in a $50,000 purse with a win for Ireland’s Conor Swail riding Susan and Ariel Grange’s Lansdowne. The pair laid down a blazing fast clear round in 45.83 seconds to win their match-up and the winner’s share of prize money.

Farrington commented on the event following another great evening of competition representing his winning team. “I think this is one of the best venues we can have to showcase our sport,” he stated. “It is really exciting to be here and be a part of this event, getting it off the ground. A special thank you to everybody that has put big efforts into making this happen – Mark Bellissimo, Donald Trump, Rolex being our sponsor here, all the staff of the park, and everybody that has helped. I think for the first year, it’s a success, and I know there will be big efforts into making it better. I think that this could turn into a major stop on our tour and turn into a world-class event.”

With a very talented group of experienced international competitors on his team, Farrington’s job as captain was easy. “If you look at my list of riders they don’t need any advice,” Farrington declared. “They know what their plan is. They all know what they are doing, so I don’t really need to do anything.”

Conor Swail knew his plan with top mount Lansdowne, with whom he has had many international wins together. “I was fortunate that I have Lansdowne, and he is my top grand prix horse,” Swail acknowledged. “It was a lot of fun tonight. The horse has done a lot of big classes, so it was nice for him to run around and be able to enjoy himself and go as fast as he could. You have a good plan before you go in and you try and execute it the best you can, and thankfully it came off very well for me tonight. The horse was fabulous.”

“It’s fantastic to be invited to this show, to be a part of such a fantastic event here,” Swail added. “I think in the future it can grow to be one of the biggest shows in the world.”

Mark Bellissimo of International Equestrian Group (IEG) was happy with another great night of competition and congratulated the riders. He looks forward to planning an even better event next year and is already brainstorming great ideas with everyone involved.

“I think we cut our teeth on this and hopefully we’ll have a good blueprint and learn a lot of the different elements or areas of feedback,” Bellissimo stated. “Some riders have some very good ideas. We are very excited about the future of this event, and I think we will spend the next weeks and months figuring out how to work on a strategy for Central Park version number two.”

Chrystine Tauber, President of the United States Equestrian Federation (USEF), was on hand for the competition as well and thanked Bellissimo for putting the event together. “To be able to bring sport horses right into the heart of New York City and have this backdrop is an absolutely amazing opportunity for our sport,” Tauber stated. “We are going to continue working together in the future to build this event. It has gone very smoothly. I want to thank everybody, and we look forward to coming up with some really interesting events that we can develop. I think this is a world-class stage, and we will make it into a world-class event going forward on all levels.”

Friday night also hosted a $5,000 speed competition for the junior and amateur riders. The class saw a win for Hilary McNerney riding Amy Carr’s Oscar with a clear round and the winning time of 51.87 seconds. For her victory, McNerney was presented with a VertuoLine Chrome Nespresso machine.

Brianne Link and E-Bay had a rail, but were still very fast to finish second in 53.05 seconds with their faults converted into time. Yamin Rizvi and Peacock Ridge Farm LLC’s Delilah jumped clear in 55.57 seconds to finish third.

“I’m super grateful because my horse is so fast, and I wasn’t worried about going into this ring with him,” McNerney said of her ride. “He can do anything. He’s a little bit older; he’s 18, so we try not to do too much with him.”

McNerney just graduated from Duke University and got Oscar this summer when she decided to get back into riding. “Kent got me this horse who is amazing. I went to school and decided to just take those four years and focus on school,” she explained. “I’d ride occasionally when I could. After school I wanted to take a year and see how it goes and get back into it. I missed it for the four years.”

McNerney recently moved into the city and was very excited to compete in Central Park at this inaugural event. “Walking into the ring, it was like, ‘Wow, we’re in Central Park!’ It’s really cool to ride in this ring and show,” she expressed. “It was surreal. I’m very lucky to be able to compete here. Oscar has done everything. Ben Maher had him, and he has done Aachen and five-star grand prix. He loves it, and he loves to win. I just try to hold on and get him in the right place, and he’s good.”

The Central Park Horse Show continues on Saturday with two matinee performances at 9 a.m. and 12 p.m. followed by a special evening of dressage. The Central Park Dressage Challenge, presented by The Axel Johnson Group, will host some of the world’s top dressage horses and riders, featuring Olympic gold medalist Isabell Werth and American superstars Steffen Peters and Ravel.

The U.S. Polo Assn. Central Park Polo Challenge will conclude the weekend on Sunday afternoon at 3 pm. Entertaining matinee performances will also be held on Sunday at 9 am and 12 pm.

Discounted Hotel rooms are available at the JW Marriott Essex House at the following link: http://bit.ly/1nRumC6.

Leading brand of the Swiss watch industry, Rolex, headquartered in Geneva, enjoys an unrivalled reputation for quality and expertise the world over. Its Oyster watches, all certified as chronometers for their precision, are symbols of excellence, performance and prestige. A pioneer in the development of the wristwatch as early as 1905, the brand is at the origin of numerous major watchmaking innovations, such as the Oyster, the first waterproof wristwatch, launched in 1926, and the Perpetual rotor self-winding mechanism introduced in 1931. Rolex has registered over 400 patents in the course of its history. A truly integrated and independent manufacturing company, Rolex designs, develops and produces in-house all the essential components of its watches, from the casting of the gold alloys to the machining, crafting, assembly and finishing of the movement, case, dial and bracelet. Rolex is also actively involved in supporting the arts, sports, exploration, the spirit of enterprise, and the environment through a broad palette of sponsoring activities as well as philanthropic programmes.

About The Chronicle of the Horse

For 76 years, The Chronicle of the Horse has been the industry leader in providing news coverage of national and international sport horse competitions. Through our award-winning weekly magazine and web coverage we offer everything from competition results to compelling features and thought-provoking commentary. The Chronicle Untacked quarterly lifestyle publication launched in 2013 to rave review. Read more at www.chronofhorse.com.