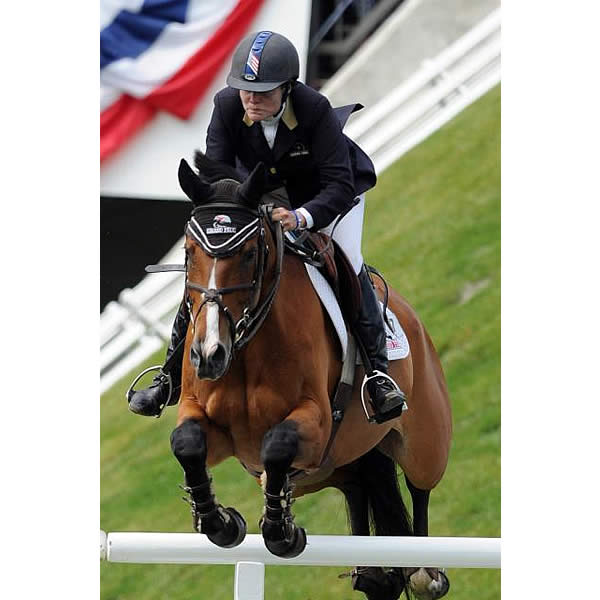 Attendance during this ‘National’ week was 86,715, with 36,000 people coming to Spruce Meadows on Sunday. It was a great testament to the fans of show jumping and Spruce Meadows in that there was a 32,000 person increase from this week in 2012.

Since the course was re-designed by Leopoldo Palacios in 2007, there have only been three clear rounds in the history of the Nexen Cup Derby. Riders tackle the same course every year. Two of the clear rounds in the history of the class were tallied by Beezie Madden and Judgement, three-time winners of the competition. Pablo Barrios and G&C Sinatra were also clear in 2010. Last year’s winners, Richard Spooner and Cristallo, had just one time fault.

With a course distance of 1,100 meters and 25 obstacles including the large derby bank, table bank, open water, and grob, the Nexen Cup Derby is a challenge for anyone entering the ring. It’s a test of scope, stamina, and heart.

This year the heights and widths of the fences were made more inviting for competitors as part of Spruce Meadows’ commitment to helping develop a new generation of derby horses. In addition, all who completed the course from fifth to 17th place received $5,000 in prize money. There were no eliminations in today’s competition, so everyone took home prize money.

Today’s competition had 17 entries. Two horse and rider combinations were able to get through the course with the least amount of faults: Beezie Madden and Wrigley were the first to accumulate just four faults, which came at fence 3a of the table bank. Seven horses later, it was 2011 Nexen Cup Derby winners Leslie Howard and Lennox Lewis 2 who had one rail at fence 11, the dry ditch oxer.

The two riders could have jumped off for the winner’s share of prize money; however, it was announced that Wrigley could not come back for a jump-off. Howard and Lennox Lewis 2 returned and completed the jump-off with four faults in 54.27 seconds for the win.

When asked why she completed the entire jump-off, Howard replied, “Spruce Meadows does so much for us, and I know it was important for them to have somebody come back for the jump-off. It’s the least we can do to give back to Spruce.”

Madden said it was an easy decision not to return for the jump-off since Wrigley was “quite sore.” Madden explained, “She’ll be okay; her back foot stepped on her front foot. She had a pretty big gash and she was bleeding. At the end when I pulled up, I could tell it was bothering her, but I didn’t notice it during the course. It’s disappointing I didn’t get the chance to win, but I’m ecstatic about how she went. Second is still a good prize in the derby.”

The course stays the same every year, and that’s something that Howard says helps if you have a veteran horse like Lennox Lewis 2. “It gets easier if you’re riding a horse that you’ve ridden over that course before. I used to get sick to my stomach when I did the derbies,” she revealed. “When I walked the derby, I’d literally get ill. Now with ‘Lennie,’ you wake up on Sunday morning and go, ‘It’s Derby Day!’ If you have a horse that you don’t know, you wake up and go, ‘Oh dear, it’s Derby Day.’ It really depends on the horse you’re on. It’s a blast because I know he’s going to go through grob, he’s going to do the liverpools, I know he’s not going to do anything stupid. The worst that’s going to happen is we’re going to have some rails.”

Howard described Lennox Lewis as the quintessential derby horse. “He’s been in the top of the derbies every year since I’ve been doing them, probably four or five years,” she said. “He’s just a great derby horse. He’s easy to ride, he’s very brave. He’s not hard on himself. He never jumps too exuberantly; he doesn’t get too excited about anything. He’s just very steady Eddie. That’s a great attribute in a derby horse.”

Although Madden had never ridden Wrigley in the derby before, Wrigley’s former rider, Callie Schott, had, so Madden knew the grey mare could do it. “It’s like Leslie said – it’s nice to be out there with a horse you have confidence in and you know is going to go from start to finish without any big catastrophes. It gives you more confidence. It enables you to ride the course so that the horse can jump clean too, because otherwise you’re overriding everywhere,” she said. “She has good blood and stamina, for sure. That’s part of what makes her a good derby horse.”

Ashlee Bond had a solid day with her two horses in the competitions. She and Wistful had two rails at fences 19a and the final jump, 19, for eight faults in 155.05 seconds for third place. On Cadett 7, she had 12 faults in 148.23 seconds for fourth place.

This was Wistful’s first derby, and their finish today helped Bond win the CN Spruce Meadows Canadian Championship. “I’m so proud of her,” Bond said. “This whole week she has just risen to the occasion. Everything I’ve ever asked of her, she’s never questioned.”

The CN Spruce Meadows Canadian Championship was decided today after points were accumulated in four competitions: the Friends of the Meadows 1.60m, Spectra Energy Cup, CN Reliability Grand Prix, and Nexen Cup. For her top placings all week, Bond received $15,000 in bonus prize money, a championship cooler, and medal. Charlie Jacobs and Flaming Star won the Silver Medal and $7,500 in prize money. The bronze medal and $2,500 went to Katie Prudent and V.

Bond expressed, “I’m very honored. It was a nice surprise. Before I did Cadett, I knew I had won that. It’s a really great accomplishment. To be able to do it twice now is great. Every time I come here, I’m really excited because I know the competition is going to be great and there’s a lot of prize money to be had. You’ve got to come with the right horses. Wistful decided to grow up a little bit this week. It worked out to be a consistent week. I’m savoring it for right now and on Tuesday it’s a clean slate all over again.”

The $40,000 ATCO Structures & Logistics Cup 1.50m featured 21 entries going for speed over a faults converted format course. Going second to last, it was Eric Lamaze and Wang Chung M2S who would be able to take the lead with a time of 84.74 seconds. Three horses earlier, it was Reed Kessler (USA) and Ligist who set a time of 85.33 seconds, which would eventually finish second. Cameron Hanley (IRL) and Newton du Haut Bois were third with a time of 85.58 seconds.

Lamaze made the decision to watch most of the competition to see how he could be faster. Lamaze explained, “In these classes, it’s so important to watch more than warm-up. In the class there are so many fences to jump, so I only jump six fences (in the warm-up). The best are at the end, so I glued myself to the TV for as long as I could to watch, watch, watch. I had my strategy. I knew I could do nine (strides) to the double vertical with him. He’s very clever with that stuff.”

Wang Chung, a 10-year-old KWPN stallion by Royal Bravour x Ahorn owned by Morningside Stud & Torrey Pines Stable, is now Lamaze’s most experienced horse. As “a great 1.45m, 1.50m horse,” Lamaze noted that competitions of this type are exactly in his comfort zone.

“He’s really a competitive horse,” he noted. “When I had the other horses, that’s what he did for me, that I used in all those (speed) classes. It’s great to go in a competition like that, feeling maybe not that you’re the favorite, but I feel like I can play to win. It’s nice to have one during the week that you can really go on.”

While Wang Chung is a “very little horse,” Lamaze said his big stride is what helps him, along with the fact that “you can run him and he never gets flat or strong.” Lamaze added, “What makes him a great speed horse is that he’s very cold. He never gets hot, he never gets quick. You can always push him. He doesn’t go by himself, that’s why he’s able to do so many speed classes.”

Since revamping his string of horses, Wang Chung has had to step up in certain events, like Florida’s Nations Cup event. But Lamaze is excited to have two new nine-year-old horses that will move up to the big grand prix events in the coming weeks at Spruce Meadows.

Since stepping off the plane last week from Belgium, both Powerplay and Quelmec du Gery had a trial by fire in the International Ring. “If you’ve never competed on a horse here, even if you know it well, it’s always difficult,” Lamaze conceded. “So on horses that have never been here and you don’t know, it’s a difficult task, but they went extremely well. The most logical thing was to do 1.30m or 1.35m with them, but I was so excited to be in this ring that I was like, ‘Eh, I’ll try it!’ It’s really exciting for me. This season is going to be about learning everything about them and them learning about me.”

PD Stables won the “Jump To It” contest and took home the prize of a full set of jumps for their farm.

Dr. John and Chris Wood “Pegasus” Memorial Award is given to a volunteer that has gone above and beyond the call of duty, and this year’s winner is Renee Richardson.

The RSA Scholarships were awarded today as well, with Maeve Scarborough on Oscar and Shelby Edwards on Renaissance taking home the honors.