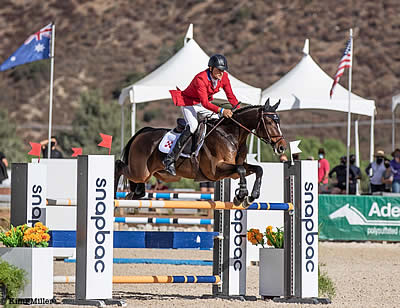 Temecula, Ca. – Oct. 31, 2020 – CCI4*-L eventing competition wrapped up Saturday afternoon with Boyd Martin completing his first-ever victory gallop at Galway Downs. Martin and Luke 140, owned by the Luke 140 Syndicate, won the event from start to finish, just adding a smidge of time to his leading dressage score following both cross-country and show jumping.

Mark Donovan’s show jumping course design which required horse and riders to come into the ring prepared as the time was tight and asked a lot from the CCI4*-L competitors. Only one horse and rider pair, Liz Halliday-Sharp and Cooley Quicksilver, was able to execute Donovan’s track without time faults. Even with the addition of 1.20 seconds of time to his final score, Martin and Luke 140 secured the win on a score of 31, with Tamie Smith and Passepartout following right behind on a score of 32.40.

Despite the fact that Martin has only ever competed at the Temecula, California venue once previously with self-described less than desirable results or that this was Luke 140’s debut at the CCI4*-L level, the duo proved a formidable match all weekend long. Admittedly, Martin thought his other mount and long-time partner Long Island T would be the one leading the pack over the course of the weekend.

“I came out here thinking ‘Ludwig’ [Long Island T] might beat Luke this weekend. But it was Luke’s weekend, and I’m really glad I brought him out here,” Martin shared. He also commented that he has been preaching Luke 140’s international potential to the members of the horse’s ownership syndicate and shared that “this weekend is the first real moment that proves it.” After a successful weekend overall, Martin is excited to aim both Long Island T and Luke 140 towards the 5* stage.

Second-place finisher and California native Tamie Smith was thrilled with Passepartout’s 4* debut, telling the horse, “You almost won your first 4*!” The duo finished the weekend off, adding just .40 time faults following show jumping. Martin wrapped up the top three with Long Island T on a score of 36.40.