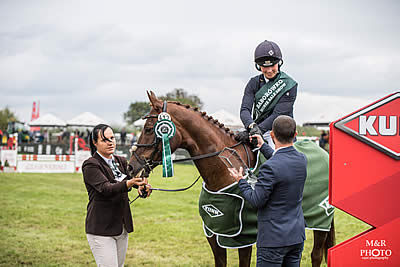 Nadine Marzahl (GER) had taken the lead after cross country in the CCI4*-S with Valentine 18. The pair went clear in the showjumping to win the whole class. The German rider had three horses in the class, finishing on the 5th position with Vally K and 18th with Victoria 108. Another German athlete, Sophie Leube, took home the second place with Jadore Moi, and Beeke Jankowski (GER) was third with Tiberius 20.

In the CCI3*-S, for the prize of Lotto, the best pair after dressage, Leonie Kuhlmann (GER) with Hidalgo 179, kept their lead after showjumping. Second place went to Paulina Maciejewska (POL) riding Jangcy L, and third to Malin Hansen-Hotopp (GER) with Quidditch K.

The best rider of the CCI2*-S, for the prize of Duon, was Stephanie Böhe (GER) with Ashanti de la Ribiere. Jaagup Kallas (EST) was second with Olli Royal, and third place went to Elmar Lesch (GER) riding Atlanta.