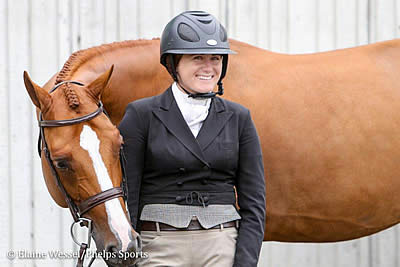 Wellington, Fla. – Jan. 11, 2019 – Victoria Colvin capped off an outstanding 2018 competitive season and will be heading into the 2019 winter horse shows with a new accolade to her name as the newest recipient of the Emerson Burr Trophy, which was awarded to her at the US Equestrian Pegasus Awards on Jan. 10, 2019. As the distinguished winner, Colvin was also one of the 2018 USEF Equestrians of Honor, a title she shares with the incredible company of eight of other esteemed horsemen and horsewomen, including international athletes Laura Graves and McLain Ward.

“I am so honored to be recognized as the winner of the Emerson Burr Trophy and to be in the company of all of the other amazing award recipients this year,” said Colvin. “I couldn’t have had such a successful year without my team behind me, and I am forever appreciative of all the hard work they put in on my behalf. To receive this award is truly an honor and I’m excited to hopefully continue with this momentum headed into the 2019 horse show season.”

The Emerson Burr Trophy recognizes horsemen or horsewomen who have excelled above all others in equestrian competition for the current year, while demonstrating superior sportsmanship and dedication to the principles, vision, and mission of the United States Equestrian Federation, specifically within the hunter ring. Colvin shares the distinction with notable past winners such as Liza Boyd, Peter Pletcher, Scott Stewart, Danny Robertshaw, and Jenny Karazissis.

Throughout 2018, Colvin accumulated wins in hunter divisions and derbies across the nation, most impressively defending her title as the reigning champion at the 2018 USHJA International Hunter Derby Championships aboard Brad Wolf’s Private Practice, solidifying herself as only the second athlete to win the finals more than once. Earlier in the year, Colvin earned the Winter Equestrian Festival Overall Hunter Rider circuit championship thanks to consistent top placings atop numerous mounts, and she also navigated Private Practice to victory in the Welcome Class and both rounds of the $50,000 USHJA International Hunter Derby during the Deeridge Derby.