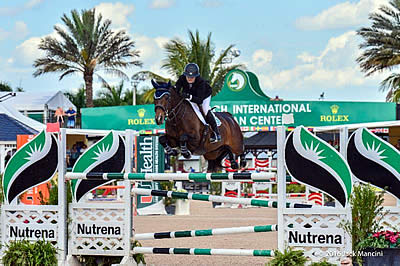 Wellington, Florida (May 2, 2016) – With the spectacular center arena of the Palm Beach International Equestrian Center set to host Grand Prix competition for the final time in the first half of 2016, a field of 43 horses and riders tested their mettle over an elaborate course designed by Mexico’s Catsy Cruz. Headlined by PonyUp Horse Treats, a producer of sustainably farmed, all natural treats, the class marked the concluding premier international competition for Wellington’s prestigious show grounds, running April 20-24, 2016. Victoria Colvin and the elegant dark bay mare Austria 2 combined speed and precision to put in a meticulous ride in both the first round and the jump-off, securing her the top spot in the PonyUp Horse Treats $30,000 Grand Prix.

As one of only four double clears following the 11 horse jump-off, Colvin and the 2008 Holsteiner mare (Casall x U2 I), owned by Take the High Road, LLC, finished with a time of 33.174 seconds, with Angel Karolyi and Indiana 27 nipping at their heels with a 33.429. Margie Engle and Bockmanns Lazio raced to third in 34.288, while Frances Land and For Edition rounded out the double clear rounds in 38.062. Colvin and Austria 2 were the last combination to go, and the decorated hunter jumper rider had developed a feel for the course in earlier rounds aboard Echo Van T Spieveld and Chanel B 2. The typically fast mare benefitted from Colvin’s experience over the fences, and the pair found a winning balance of speed and synergy to top the class. Todd Minikus and Mark Bluman each put in quick rides in the jump off that would have bested Colvin’s, if not for single rails that dropped them out of the double clears.

“This was the biggest course we’ve ridden in the US,” said Colvin. “We took her last year in the 7-year-olds in Europe, and have been slowly moving her up and gaining experience. She’s a firecracker to ride, and we’ve been turning that forward energy into fast times on course. Today I wanted to win, but also wanted to be sure she wasn’t rushing. The course had some challenges for us, and I am really with how she handled them. Our plan for the future is to move her up to the 1.50m and the bigger Grand Prixs gradually so she has the strength and experience to stay clear while preserving her speed.”