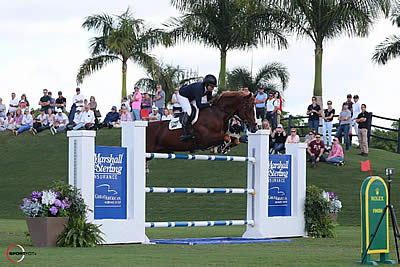 Wellington, FL – February 2, 2019 – In a day full of top competition at both venues of the Palm Beach International Equestrian Center in Wellington, FL, fans of equestrian sport were treated to a thrilling jump-off in the $209,000 Marshall & Sterling/Great American Grand Prix CSI 4* on Saturday, February 2. Olympic team gold medalist Beezie Madden (USA) rode Darry Lou to the top spot in the grand prix.

Competing over a course set by Brazil’s Anderson Lima on the stunning grass derby field at Equestrian Village, 45 entries completed the first round, with 13 clear to advance to the jump-off. Of those 13, it was a mix of show jumping veterans and up-and-coming rookies, but it was the veterans who would take the podium places on the day.

Olympian Amy Millar of Canada and her 2016 Olympic mount Heros, owned by Ammo Investments, set the early time to beat with a clear round in 41 seconds flat, which would hold up for seventh place. The leading time was dropped to 38.87 seconds by 21-year-old Lucas Porter (USA) riding Sleepy P Ranch LLC’s Diamonte Darco. They would finish in fourth place. Olympian Margie Engle (USA) and Royce galloped through the timers in 40.19 seconds for sixth place, and they were bumped by Amanda Derbyshire (GBR) on Roulette BH, owned by Gochman Sport Horse LLC, who finished in 39.10 seconds for fifth place.

It came down to a highly anticipated jump-off finale with three American riders in the top 4 in the country deciding the final placings.

The “Saturday Night Lights” of the 12-week Winter Equestrian Festival (WEF) beamed on Palm Beach County Charities during the 10th Annual Great Charity Challenge, presented by Fidelity Investments® (GCC), on Saturday, February 2. Holy Ground Shelter for the Homeless took home $150,000 as the lion’s share of the $1.3 million in prize money on offer after their team of riders David Blake, Carly Dvorkin, and Madelyn Ruskin, along with team sponsor Pine Hollow and corporate sponsor Havensafe Farm, took the victory.

“We Are the World” was the theme of the night with riders, charities, local families, and horse sport fans coming dressed in support of their favorite nation. In total, the evening’s contributions brought the overall Great Charity Challenge tally to $13.5 million distributed to more than 230 well-deserving Palm Beach County charities over the last 10 years.

Saturday competition in the Rost Arena at the 2019 Winter Equestrian Festival (WEF) saw 15 horse-and-rider teams return for an early morning start in the Small Junior Hunter 3’6” 15 & Under division. Augusta Iwasaki of Calabasas, CA returned to the ring with three separate mounts but would ultimately take the tricolor ribbon aboard her newest mount, Small Request.

Iwasaki and the seven-year-old Westphalian gelding (Quaid x For Bella) held the lead for the duration of the division as the duo picked up three firsts and a second across the classes. Small Request is a recently imported gelding owned by Elizabeth Reilly and Augusta/Chris Iwasaki.