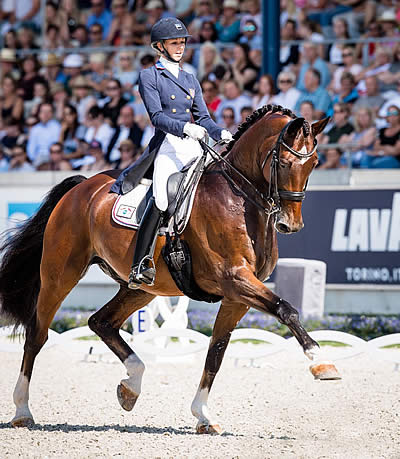 Verdades (Florett AS x Liwilarda/Goya), a 16-year-old Dutch Warmblood gelding, affectionately known as Diddy, began his journey to international success in 2014 after garnering attention from his reserve-champion finish at the U.S. Dressage Festival of Champions presented by The Dutta Corp. Since his launch into the spotlight with his life-long rider and trainer Graves, Verdades’s achievements and continued success are profound. In 2018, Verdades again proved why he is one of the best horses to grace the international dressage ring as he won the Grand Prix at the FEI World Cup™ Dressage Finals in Paris and helped the U.S. team earn a silver medal in the FEI Dressage Nations Cup™ Germany. He and Graves then rode for silver medal-winning The Dutta Corp. U.S. Dressage Team at the FEI World Equestrian Games™ (WEG) Tryon 2018.

Since being rounded up in the mountains of Nevada at the age of six, Cobra’s trainer and owner Marsha Hartford-Sapp has been devoted to the 14-year-old mustang gelding and proceeded training him with caution and respect for his instincts, creating a deep bond. Their mutual trust has seen them through competitions in both classical and Western dressage, where Cobra’s versatility and talent for each has been apparent. As one of the founding horses of USEF Western dressage competition, Cobra was one of the first recipients of the 2015 Horse of the Year awards in that discipline and has continued to collect numerous accolades ever since.

“It wasn’t even about that moment when the Olympic medal was placed around my neck. It was about the joy. Despite hardships, heartbreaks, and massive, massive life failures, always overwhelming joy… [and] the fact that this great horse brings so much joy to so many people.” – Laura Graves on her 2018 International Horse of the Year

“Several years ago, I stood in the middle of a round pen with a horse that was six years old, rounded up by a helicopter, and never touched by human hands.” – Marsha Hartford-Sapp