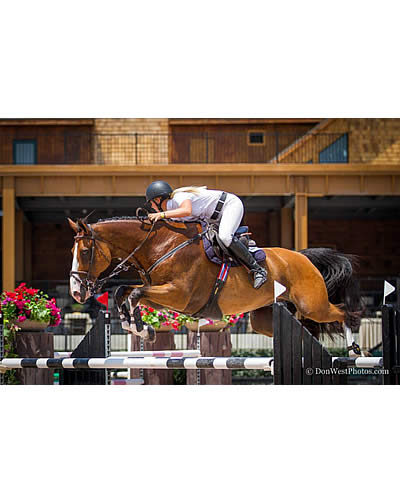 Mill Spring, NC – June 24, 2015 – Kristen Vanderveen (USA) and Bull Run’s Eternal flew to the top of the leaderboard in the $34,000 1.50m Speed Stake at Tryon International Equestrian Center (TIEC), collecting her second career FEI win at the venue, completing the track in 66.12 seconds. Ljubov Kochetova (RUS) and Balou Du Reventon finished second in 71.1 seconds. Upcoming American talent Wilton Porter (USA) and Delinquent JX followed in third, crossing the timers in 71.18 seconds. The $34,000 1.50m Speed Stake marked the start of FEI competition at the Tryon Summer Series, which will offer four consecutive weeks of FEI competition to competitors from around the world. Competition at Tryon Summer 1 will continue through Sunday, June 28, and the Tryon Summer Series will conclude on Sunday, July 19.

Vanderveen and Bull Run’s Eternal, a seasoned pair, dominated the course and tripped the timers five seconds faster than second place finisher Kochetova and Balou Du Reventon. Vanderveen, known for her speedy style, feels confident in the speed classes aboard Bull Run’s Eternal, as he uses the length of his stride to a complete advantage in the ring. The course, designed by Ken Krome (USA), was held in the George H. Morris Arena in Tryon Stadium. There were 16 clear trips, with only Vanderveen finishing below the 70-second mark, out of 29 class entries.

“Winning always feels awesome. I love doing the speed classes on him because I’ve had him the longest out of all of my horses and I know him really well. Walking it today, I had a great feeling and it absolutely suited him,” she commented. “He’s great with turns because he uses his big step really well. We can slice right into some of the distances and leave out some strides, which is where we were able to pick up the win.”

Bull Run’s Eternal excels at keeping his composure in the ring, which allows Vanderveen to ask for adjustments quite easily throughout their trip. According to Vanderveen, riding him is like putting on an old glove and their connection helps the duo to tackle any type of pressure situation in the ring.

“It’s amazing how he can just cut in and hold his big canter and take out a lot of strides. He’s such a big horse so you wouldn’t think that he would be competitive in the speed classes, but he is,” she said. “He’s my comfort ride. He always makes me feel like I know what I’m doing. I’ve had him for almost three years and he was my first ‘real’ horse. He’s conventional in what he does and absolutely loves his job. He has really helped me step into the ranks and has given me the confidence I’ve needed in these type of classes.”

Accumulating top finishes throughout the Tryon season, Vanderveen continues to prove herself as a consistent and gritty talent at the upper levels of the sport. Vanderveen will contest the next three weeks of the Tryon Summer Series and will bring out three top mounts for the highly anticipated Tryon Summer 3 CSI 4*, which is a significant accomplishment for any rider so early on in their career.

“I’m incredibly excited to be bringing three horses out for the CSI 4* in two weeks. It’s nice to have several horses that are capable of competing at that level because there are so many classes and opportunities to take advantage of,” remarked Vanderveen. “Bull Run’s Eternal will jump once more this week and then will get next week off before we start prepping for the 4* week and we’ll give that a whirl,” she smiled.

FEI competition continues at TEIC with the $34,000 Suncast 1.45m Welcome FEI tomorrow beginning at 8am. Tryon Summer 1 will also host the first of four consecutive ‘Saturday Night Lights’ competitions at TIEC, with gates opening at 6pm and competition beginning at 8pm. For more information on TIEC and for a full list of results, please visit www.tryon.com. Please “Like” the TIEC Facebook page at https://www.facebook.com/pages/Tryon-International-Equestrian-Center to be eligible for various contests and promotions.