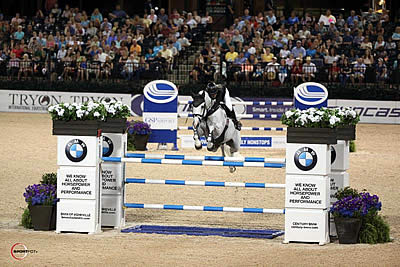 Vanderveen and Bull Run’s Faustino De Tili managed to secure the last spot in the jump-off, as the final pair on course in the first round. Michel Vaillancourt (CAN) set a flowing, but technical track, which saw rails fall throughout the evening. Thirty horse and rider combinations contested the first round track, while seven pairs returned to try and secure a victory in the jump-off round.

“We love it here. He felt great from this morning on. He was in a great mood all day and it felt like it was going to be a good class,” smiled Vanderveen. “When I walked the course I thought it was really nice. It was one of those courses where it was set so nice, that you can easily make silly errors because you’re floating around, so I knew I had to pay attention.”

The duo has secured a number of FEI wins at the venue, with a highlight victory last season in the $380,000 Horseware® Ireland Grand Prix CSI 5*, the first FEI CSI 5* competition ever hosted at TIEC. The pair also secured a second CSI 3* win earlier this week, taking the $35,000 1.45m Suncast® Commercial Welcome CSI 3* on Thursday.

TIEC also holds a special place in Vanderveen’s heart, as she earned her first-ever international grand prix win, which came aboard Bull Run’s Faustino De Tili, in the $127,000 Kingsland Grand Prix CSI 3* in July of 2015.

“He was very excited under the lights and was pulling me to the jumps a little bit more than he usually does. He felt really relaxed and this is home for him. He loves this ring and he loves this atmosphere,” she added. “He always performs here. He builds on this atmosphere instead of getting nervous from it, which is great. It is so beneficial for us because he continues to get positive experience under the lights.”

Vanderveen noted that their draw to go last in the class worked to their advantage in the particularly tricky jump-off round, which caught a majority of the contestants with at least four faults.

“It was an advantage to go at the end. It was a great draw. I got to see that Debbie [Stephens] was the only clean, so I knew I could go at a medium pace and see if I could beat her time without taking any huge risks,” explained Vanderveen. “I feel like many of the riders who had to go at the beginning laid it all on the line and took some risks that we ended up not needing to take.

“I thought it was a great jump-off. There was a lot of galloping that then transitioned into some roll-back turns, which surprised some of the horse with the jump. I think that’s probably where a lot of people got caught off guard,” she added.

Bull Run’s Faustino De Tili has amassed an impressive record with Vanderveen and the duo is still only in the early stages of their career and partnership together. The 2005 Belgian Warmblood stallion (Berlin x Darco) owned by Bull Run Jumper’s Five LLC, is transitioning back to the larger grand prix classes, after Vanderveen studied and worked on their speed and agility this winter in Wellington, FL. According to Vanderveen, their training has paid off, as she now feels that he has strengthened his awareness and agility in the ring.

“This is a horse who likes to have fun, which is why we really have focused on speed with him. When the sport gets too serious he starts to lose his shine and personality. I think those classes got him back to a point where he was having fun with what we were doing,” Vanderveen detailed, describing her training program with the flashy stallion. “I’ve tried to rein him back in a little bit because he was starting to get strong, but that’s the way he likes to go. He likes to pull into the bridle and go. That’s where he feels confident.

“He’s gotten quite careful. Before, I felt like I was maybe holding him thinking he may need the pressure off of the ground, where now, after these speed classes, he’s automatically looking for the next jump and standing off of it on his own. It’s been a huge improvement,” she added.

The duo will return to the main arena at TIEC next week as they are set to contest the FEI CSI 4* hosted at the venue and welcoming Tryon Summer II. Vanderveen commented on her plans for Bull Run’s Faustino De Tili following their anticipated start next week.

“He’ll do next week and then I think we’re going to give him some downtime. I’ll focus on some of the younger horses that we’ve just imported and let him take a break and reset before what we hope is a productive and busy fall season,” she said.

Vanderveen also received the Leading Lady Jumper Rider Award presented by Meg Atkinson of Town and Country Realtors, while her groom, Luis Salvaras, was awarded with the Absorbine FEI Groom’s Award, for his care and dedication to the evening’s grand prix winner.