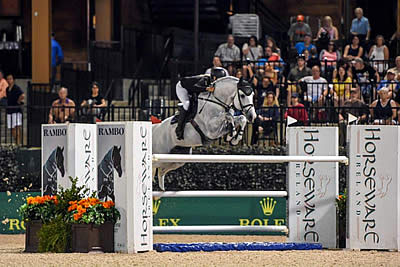 Mill Spring, NC – June 11, 2016 – On a historic and entertaining evening at Tryon International Equestrian Center (TIEC) featuring performances by Grammy-award winning artist Lee Greenwood and a special aviation demonstration by the Warbirds Flyover team, Kristen Vanderveen (USA) guided Bull Run’s Faustino De Tili to their first ever FEI CSI 5* victory, signaling the conclusion of an incredibly successful spring series. The duo, which earned their victory in the $380,000 Horseware Ireland Grand Prix CSI 5* for the Governor’s Cup in front of an enthusiastic crowd, outlasted the eleven horse jump-off with a time of 42.557 seconds for the win. Andrew Welles (USA) and Brindis Bogibo finished in second place, crossing through the timers in 44.191 seconds, while David Blake (IRL) and Binkie completed their FEI CSI 5* debut in third, finishing the track in 46.668 seconds.

Saturday’s event brought together a massive crowd from the western North Carolina region, amplifying the atmosphere in the stadium and creating a unique experience for a class full of veteran riders and rising stars. Vanderveen and Bull Run’s Faustino De Tili followed several incredible performances in the electrifying jump-off round, which saw eleven combinations test the short course designed by Alan Wade (IRL).

Each of the top three placed horse and rider combinations contested their first major FEI CSI 5* class, making it a memorable evening for each of them individually, as well as marking a monumental class for the sport of show jumping, as three talented riders reached the podium at the highest levels of the sport for the first time.

“I have no words. I’ve never won a class of this caliber before and I’m overwhelmed and excited,” smiled Vanderveen, whose energy was palpable after the class. “He was super relaxed today and this is his second night class here this season. In the first class, he was a little bit excited, but tonight he really settled in and fed off of the atmosphere and the crowd, which was great.”

Vanderveen earned her first career FEI win at the venue in 2015 aboard Bull Run’s Faustino De Tili in the $127,000 Kingsland Grand Prix and the two have only improved since garnering a series of top finishes throughout the 2016 season. Determined to piece together two strong rounds of competition under the lights, Vanderveen rode the 2005 Belgian Warmblood stallion (Berlin x Darco) owned by Bull Run Jumpers Five LLC, with a forward pace, making use of his large stride, especially on the short course track.

“I wanted to give this class a real shot. I went in knowing that I was going to go for it and lay it out there. It worked out well for us and he was really with me. He used a lot of his ability and thankfully he has a lot to give,” she elaborated.

Getting to know the talented stallion has been a focus of Vanderveen’s, as the pair encountered immediate success before re-evaluating a training regimen and competition plan in the past few months. She described the process, stating, “It’s been coming up on a year and a half that we’ve had him. It’s still a new partnership and finally over the past six months we’ve really started to understand each other better.

“I’m looking forward to finishing the season here through July and building on that consistency,” she detailed, explaining their competition plans for the coming months. “I’m really looking towards the winter season again, as that’s where I’d really like to start pulling all of these pieces together and do some big things with him there as well.”

Welles, who earned a top career finish in the FEI CSI 4* competition at TIEC nearly a year ago, guided Brindis Bogibo to a well-earned second place. The pair, who recently began competing at the FEI level together, proved that their partnership has grown tremendously in the past two months.

“It’s an amazing feeling. I’m over the moon right now. Just seeing the atmosphere and it was such a beautiful night for an event like this,” commented Welles. “The crowd that they drew and the plane flyover, I just feel so fortunate to have been able to compete in this class and anything on top of that was just a bonus.”

Saturday’s competition came full circle for Welles, who explained that his fourth place finish in the grand prix at the FEI CSI 4* during the Tryon Spring Series in 2015, propelled the purchase of Brindis Bogibo, as AEM Enterprises and the Scudder family, approached him concluding the class, offering support for another horse to compete at the top levels.

“I would say our good finish here last year with my mare Boo was the catalyst for getting Brindis. I flew over the day after this horse show to try him. AEM Enterprises and the Scudder family have been so supportive of me. I don’t think we pictured coming back here and finishing better the next year, but it’s a great feeling.”

The 2006 Dutch Warmblood gelding (Grand Pilot I x Pacific), owned by AEM Enterprises, has stepped up recently, and Welles felt it was time to test the gelding, without holding any expectations for the outcome of this week.

“He’s just such a special horse. He has an unbelievable character and a huge heart. He hadn’t jumped bigger than a 1.35m last year when we bought him as a nine year old, so I’ve spent the fall and the winter filling in the pieces. It’s really started to come together over the past two months,” he detailed.

“It’s been a very fun ride. I feel incredibly blessed to have him and the entire team around me. I just owe it all to them,” he added.

Originally, the main event of the week, the $380,000 Horseware Ireland Grand Prix CSI 5* for the Governor’s Cup, was not even a consideration for Welles, who didn’t anticipate that his mount would be ready to compete at the CSI 5* level this early in the season. Undaunted by course, Brindis and Welles made easy work of the first round track and only a small bobble to a difficult slice at the Rolex vertical would drop them behind the pace of Vanderveen.

“I hadn’t really committed to do this class. My original plan when I was mapping out the spring was to do Thursday and Sunday here,” he said. “He’s exceeded my expectations by leaps and bounds as to what I had planned out for the spring. The two most recent classes we did on him we had a rail and both were my fault. There was really nothing holding him back from deserving a chance to take a shot at this class.”

“I think that Alan Wade is one of the best course designers in the world and I had confidence that it would be a fair chance to move my horse up and experience this level of competition,” Welles added.

David Blake and Binkie also completed their first FEI CSI 5* and have continued to demonstrate their strength and consistency throughout the season at TIEC. Binkie and Blake finished well throughout the week, but Blake explained he felt Binkie was excellently prepared, both mentally and physically for the test of the main event, in which he excelled.

“I thought last week he felt great and was a bit unlucky. He jumped great and had a rail down in the jump-off, but I knew that he was ready for this week,” commented Blake. “Again, I felt like we were a bit unlucky in the Welcome, so I knew we were knocking on the door for a good performance.”

The duo worked for their first round effort, but Binkie rose to the occasion around the short course, nearly pressing Vanderveen for time during the last line, which concluded at the Horseware Ireland oxer in front of the crowd.

“I had to work in the first round tonight, but then in the jump-off he really worked for me. The crowd was really great tonight and I could feel that he was feeding off of that energy, especially going into the double. It worked out really well tonight and I’m just delighted with him.”

Luis Salvaras accepted the $500 Groom’s Initiative Award presented by Mark Bellissimo and the Tryon Equestrian Partners, recognizing his efforts as the main care provider for Vanderveen’s winning mount Bull Run’s Faustino De Tili. An essential member of the Bull Run Jumpers team, Salvaras is responsible and dedicated to the daily care and well-being of the incredibly talented stallion, who has become a top mount in Vanderveen’s string.

Among several other awards, Vanderveen received the Leading Lady Rider Award presented by Meg Atkinson for the second week in a row, honoring and recognizing her success and performance in FEI classes throughout the week.