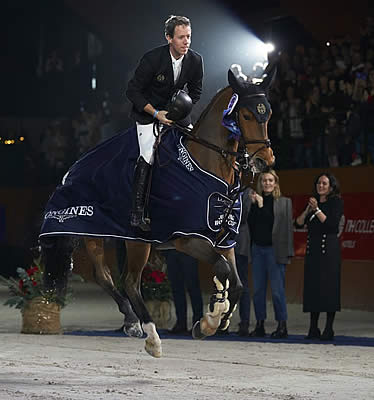 There were 40 riders from 16 different countries chasing down points in the race for a place at the Longines 2020 Final in Las Vegas, USA next April. And this seventh round of the 14-leg qualifying series was a sizzler, with anything possible right to the very end.

Van der Vleuten clinched it with an exhibition of pure partnership with the lovely Beauville Z, a gelding he has been riding since the middle of last year. Ace Spanish course designer, Santiago Varela, set them a jump-off track with multiple twists and turns and a long gallop to the last that tested trust and understanding between horse and rider every step of the way. And it was the double-Olympian who showed them all how it should be done.

Typically modest, the 31-year-old Dutchman said afterwards, “Sometimes a jump-off doesn’t go as planned and you have to put in a waiting distance, but today it was all very smooth and we had a great rhythm all the way. My horse was very good; he stayed with me, and out of all the turns we got a nice forward distance.”

First against the clock, Ireland’s Michael G Duffy set the target when clear with Lapuccino Z in 39.95 seconds, but the lead kept changing until, seventh to go, van der Vleuten came into the ring and clearly left them with very little to play with. The Dutch horse-and-rider partnership were in complete harmony as they found the tightest lines everywhere on the course and galloped through the timers to set a whole new standard in 36.94 seconds.

However, there were still six to go, and plenty more excitement ahead. Pieter Clemens, one of three Belgians into the second-round decider, was ousted from runner-up spot by Italy’s Emanuele Gaudiano and the extraordinary Chalou who stopped the clock on 37.66 seconds. And as they set off it seemed more than possible that, third-last to go, America’s Jessica Springsteen and the super-fast RMF Zecilie could alter the standings until they clipped the very first fence.

Then the Spanish crowd gasped in disbelief when their own star, Eduardo Alvarez Aznar, was jumped out of the saddle when his long-time faithful steed, Rokfeller de Pleville Bois Margot, went into orbit over the vertical third fence off a tight turn. And when Frenchman Olivier Robert (Vivaldi es Meneaux) left one on the floor it was a done deal, and a Dutch one at that.

Talking about Beauville Z which is owned by Spain’s Marta Ortega, van der Vleuten said, “He’s still only nine and not at this level for long – I think he’ll grow into a great horse; he’s the kind of horse you need to be competitive at this level.”

The Dutch rider is now going to take a short break from the World Cup circuit until early in the new year. “I’m hoping I’ll get a few more chances to get my points for the Final – after today I think about 10 more should be enough,” he pointed out, having moved his points tally up to 32 which leaves him lying fifth on the Western European League table ahead of the next leg at Olympia, London (GBR) next Saturday (21 December).