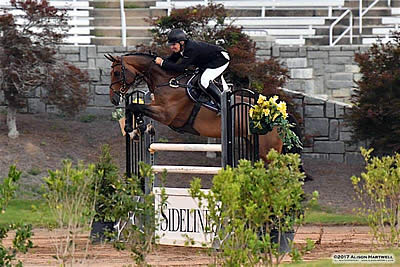 The Atlanta Summer Classic was non-stop jumper action Week I at the Georgia International Horse Park.  Featured events included the $5,000 Horseflight Welcome, the $5,000 1.15m Dash for the Cash Non-Pro Jumper Classic, the 1.15m Elite Equine Sport Horse Medicine and Lameness and the $8,000 Arenus Jr/AO Jumper Classics. The $25,000 Outback Steakhouse Grand Prix, presented by EMO, was the exclamation point event to this exciting week.

Aaron Vale of Williston, Florida dominated the Olympic Arena. He kicked off the week taking the second and third places in the $5,000 Horseflight Open Welcome with Troy Glaus’ Darling GR and his own Stakko, respectively, then proceeded to win the $25,000 Outback Steakhouse Grand Prix, presented by EMO, with Stakko as well as the fourth and ninth places with his own Bonzini S and Jorge Ludgwig’s Exclusive, respectively.

The jumper action kicked off on Friday morning with the $5,000 Horseflight Open Welcome which welcomed a field of fourteen to the Olympic Arena. Vale and Darling GR were the first to go clear with their first round time of 77.214 seconds and they set the second round time to beat at 31.828. Dana Noga of Ocala, Florida and Joan Nichols’ Obos Pepperpot were the second horse and rider team to advance to a second round and beat Vale and Darling GR’s time with their own fault free round in a time of 31.797 seconds which took the lead and set the new time to beat. Hailey Rogge of Lafayette, Louisiana and her own Zine Dine were the next to advance to the second round, but four faults in a time of 32.849 seconds would finish them in fifth place overall. Jorge Ludwig of Newbury Park, California and his own Lamarique followed Rogge for a second round, but their four faults in a time of 28.467 would see place fourth overall.. Vale and Stakko were the last pair to advance to the second round and although they posted no faults, their time of 32.000 seconds would find them taking third place, leaving the win to Noga and Obos Pepperpot.

Friday evening the highly anticipated $5,000 1.15m Non-Pro Dash for the Cash Jumper Classic took place during the Outback Charity Dinner for the Hope Clinic. A sold out VIP tent was on the edge of their seats as twenty three horse and rider teams competed over the course, one faster than the next. “Everyone had so much fun,” commented Bob Bell, President of the Classic Company. “It’s not often that these 1.15m riders can just get out there and go fast,” he said. “I got nothing but big ‘thank yous’ from everyone who competed in this event,” he added.

Michael Williamson of Loomis, California and Fairfield Farms, LLC’s Whip Jet 41 took the class with their lightning fast clear round time in 76.666 seconds, well within the 120 seconds time allowed. Second place honor went to Grace Boston of Owings Mill, Maryland and Don Stewart’s Forrest Gump 108 for their clear round in a time of 78.601 seconds. Olivia Epple of Palmetto, Georgia and Livhaven Stables’ Hot Spot took third place and Boston returned for a fourth place with The Boston Family’s Herminas. Louisa Brackett of Grayslake, Illinois and her own Memphis Belle placed fifth and Isabella Durnell of Suwanee, Georgia with MTM Farm’s MTM Fashionista earned sixth place.

Saturday welcomed thirteen horse and rider teams back to the Olympic Arena for the $25,000 Outback Steakhouse Grand Prix, presented by EMO, and only saw three horse and rider teams return for the jump off round set with a time allowed of 49 seconds. Stakko and Vale were the first to go and turned in a clear jump off in a time of 46.321 seconds, setting the new time to beat. Chasen Boggio of Caton, Georgia and his own Co Pilot followed Vale but with four jump faults in a time of 46.739 seconds, the pair would settle into third place overall. Last to go was Glenn Hartigan of Alpharetta, Georgia and his own Z Coco Cabana. The pair earned four jump faults in a time of 43.709 seconds and finished in second place.

The fastest of the four fault first rounds was Vale and Bonzini S who finished in fourth place. Fifth was awarded to Penny Brennan of Montmorenci, South Carolina and her own Sun Tzu. Julia Curtis of Villa Rica, Georgia and her own Isarus earned a sixth place finish and Tricia O’Connor of Williston, Florida and her own Cool Man 78 took seventh.

The Arenus Jr/Amateur Owner Jumper Classic welcomed Louisa Brackett and Andrew Bourns Sport Horses, Inc.’s Czechmate to the winner’s circle in the 1.40m section and Sarah Boston in the irons of Don Stewart’s Ulordiva took the 1.30m section.  Second place was Jodie Camberg with her own Veneto DH Z and third place went to Meghan Hurst and her own Lagoona Paradise.

The Elite Equine Sport Horse Medicine and Lameness 1.10m Child/Adult Jumper Classics welcomed Carly Hoft of Roselville, North Carolina and Jumper.com’s Available Ohio to the winner’s circle in the Children’s Jumper section after the pair bested a field of nine in the $2,500 class.  Second place went to Lily Bennett of Atlanta, Georgia and her own Zimba, while third place went to Anissa Jessee of Tampa, Florida and her own Twister for a third place finish.

The Adult section of the $2,500 Elite Equine Sport Horse Medicine and Lameness 1.10m Child/Adult Jumper section saw seven riders compete for the win and Kimberly Leslie of Ocala, Florida and her own El Fernantez Zet won the class.  Second place honors went to Sawyer Evans of Canton, Georgia and her own Contendra, while third place went to CF’s Alcassina ZH, owned and ridden by Sydney-Jade Matyczynski, also of Canton.

On the Road to the $30,000 Green Hunter Classic, presented by Ariat, JPC Equestrian, the Farmhouse and Friends of Ellen Veitch.

The riders were out in full force looking to earn valuable points to qualify for the Atlanta Fall Classic’s Green Hunter Classic. The top twenty will be invited to compete for no entry fee and the competition definitely got heated up during Week I.

In the Sidelines 3′ Green Hunters, Hunt tosh and Douglas Wheeler’s Bastogne took the Championship and Daniel Geitner and Hannah Echols’ Blackberry won the Sidelines Green 3’3″ Division. It’s not too late to earn points for this special Classic designed to promote the Green Hunters. Week II in Atlanta and Weeks I and II at the Charleston Summer Classic will be riders’ last opportunities to qualify.

The Atlanta Summer Classics kicked off Week I hosting the USHJA Emerging Athletes Program with well-known Chris Kappler and Anne Thorneberry as the clinicians. Dr. Jay Altman of Arenus presented a seminar on Monday and discussed the importance and connection between horse health and performance.

USEF “R” Judge, Rider, Trainer and Coach, Tony Sgarlata, will be the clinician scheduled for Monday, June 19th at the Georgia International Horse Park for the USHJA Zone 4 Complimentary Riding Clinic. The clinic will focus on General Horsemanship including flat work and jumping techniques that will improve your show ring performance for the Hunters, Jumpers and Ponies.