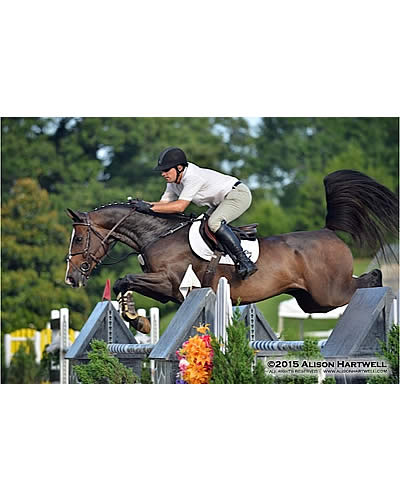 Vale and Quidam’s Good Luck fly over an oxer on their way to the win in the $15,000 Nalley Toyota Stonecrest Open Welcome Week II at the Atlanta Summer Classics.

What a week at the Atlanta Summer Classics! Big numbers in both the hunter and jumper divisions and sold out attendance in the VIP tent has set the back drop for non-stop show jumping competition at the home of the 1996 Olympic Games at the Georgia International Horse Park.

Week II heated up Thursday when the Nalley Toyota Stonecrest $15,000 Open Welcome took to the Olympic Stadium when a field of twenty-four horse and rider teams battled it out on a course designed by International Course Designer, Steve Stephens.

Stephens is one of the world’s most well-known designers and acted as the Official Course Designer of the 2008 Olympic Games in Beijing.

Eliza, owned by Kyle Dewar and ridden by Katherine Dewar of Oconomowoc, Wisconsin, turned in a clean first and second round in times of 70.014 seconds and 41.957 seconds, respectively which had them following Vale and Acolina R on the scorecard.

Vale had the next clean round with his second ride in the class, Troy Glaus’ Quidam’s Good Luck in a time of 72.197 seconds. Their clean second round in a time of 37.310 seconds put them in the lead and set the new time to beat.

Haley Gassel of Lenoir City, Tennessee in the irons of Westwind Equine Training Center’s Quite Dark 2 followed Vale with a clean first round time of 72.004 seconds, but with four jump faults in their second round in a time of 39.049 would finish in sixth place overall.

Bowers Cone of Collierville, Tennessee and Bowers Cone, LLC’s VIP Quality Royale was the next to post a clean first round in a time of 73.328 seconds. But their second round in a time of 38.860 seconds and no jump faults wasn’t fast enough to beat Vale and Quidam’s Good Luck, so the pair settled for second position.

Vale followed Cone with Bonzini S, owned by Thinks Like a Horse Farm and turned in a clean first round effort in a time of 70.793 seconds. Four faults in their jump off round in a time of 39.381 seconds would see the pair finish in seventh overall.

Deborah Stephens of Palmetto, Florida and Centennial Farm Inc.’s Swagger were next to go and turned in a clean first round effort in 70.812 seconds. Four faults in their second round with a time of 38.069 seconds would see them take the fifth place ribbon overall.

Vale returned with the next clean first round effort in the irons of Equi-Sport LLC’s E.S. Finou 4 in a time of 73.600 seconds. But eight jump faults in a time of 36.481 seconds in their second round would find the pair finish in eighth place overall.

Last in the order and the final clean first round of the class was Gassel and Westwind Equine Training Center’s Werner 61 who finished it in 68.485 seconds. However, eight jump faults in a time of 38.593 seconds would find them out of the ribbons.

Vale has been unstoppable since arriving at the Atlanta Summer Classics. As winner of Week I and II’s Open Welcome, USHJA National Hunter Derbies and last week’s $35,000 Regions Private Wealth Management Grand Prix, all eyes will be on him for tonight’s $35,000 Classic Grand Prix, presented by EMO.