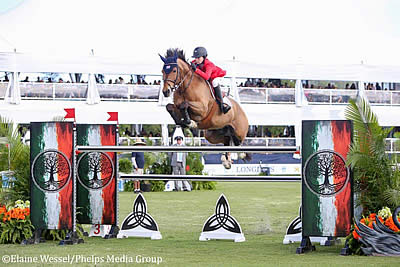 Gladstone, N.J. – July 18, 2019 – With the launch of the new Pathway to the Podium Participation Challenge, the United States Equestrian Team (USET) Foundation encourages everyone to get involved in paving the way for our U.S. equestrian teams to prepare and compete at the upcoming 2019 Pan American Games in Lima, Peru and the 2019 Adequan®/FEI North American Youth Championships (NAYC), presented by Gotham North.

By participating in the challenge, the Foundation’s supporters and fans open the pathway to the podium for U.S. athletes, from developing to elite squads, across the nation in the eight FEI disciplines of dressage, driving, endurance, eventing, para-equestrian, reining, show jumping, and vaulting.

The mission of the USET Foundation is to provide the necessary resources to make equestrian competitive excellence possible, now and in the future. These key funds support the competition, training, coaching, travel and educational needs of America’s elite and developing international and high performance horses and athletes in partnership with US Equestrian (USEF), which does not receive any direct or indirect government subsidy.

Since its inception, the USET Foundation has awarded millions of dollars to support the USEF’s high performance programs and athletes along the pathway, including the likes of Kent Farrington, Philip Dutton, Laura Graves, Laura Kraut, McLain Ward, and countless others who, thanks in part to the support received from the USET Foundation, went on to represent and achieve historic results for the U.S. at the highest levels of the sport.

From the beginning, the USET Foundation’s focus has always been on providing funding for the next generation’s international success. At the NAYC, presented by Gotham North, to be held July 24-28 (eventing) in conjunction with The Event at Rebecca Farm and July 30 – Aug. 4 (dressage and show jumping) at Old Salem Farm, the USET Foundation annually presents the coveted Maxine Beard Show Jumping Developing Rider Award.

In 2018, the Maxine Beard Show Jumping Developing Rider Award was given to Daisy Farish as the highest placing U.S. Young Rider in the individual show jumping final. As the recipient of this immense honor, Farish had the opportunity to represent the U.S. in the FEI Jumping Nations Cup™ Youth Final along with the other top finishers in the NAYC individual show jumping final, Samantha Cohen, Madison Goetzmann, and McKayla Langmeier, in Opglabbeek, Belgium in September 2018.

Another young talent, Lucy Deslauriers (20), has progressed up the pathway through the NAYC and U25 division to now representing the U.S. with podium finishes in Nations Cup competitions and most recently being named to the NetJets® U.S. Show Jumping Team for the 2019 Pan American Games.

“I feel so fortunate to have been given the opportunity to represent our country at the senior level in Nations Cup competitions over the past year,” said Deslauriers. “Only with the support of the USET Foundation and the US Equestrian pathway programs have I been able to fulfill some of my show jumping dreams.”