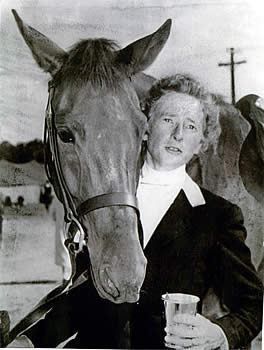 Gladstone, NJ – December 11, 2014 – The United States Equestrian Team Foundation is pleased to announce the naming of the Hamilton Farm Rotunda “The Joan and Corwith Hamill Rotunda”. Their commitment to equestrian sport began in the 1950s, when Joan was an integral part of the transition of the USET from the U.S. Army to civilians. This naming is made possible through a generous gift of $1.5 Million made to the Gladstone Fund by the The Hamill Family Foundation.

Joan grew up in Chicago riding in Lincoln Park and as her passion for the sport grew, she became very involved in the Eventing community. In 1956 Joan and her daughter Nancy competed in the National Eventing Championships, then named The Wofford Cup, which was held at the Broadmoor Hotel in Colorado Springs. This experience kindled Joan’s involvement in the recently formed USET, which had assumed the role of fielding international equestrian teams after the United States Cavalry was disbanded.

Nancy commented, “It was an extraordinary, audacious thing for a small cadre of civilians to succeed the huge U.S. Army in this endeavor. My mother was dedicated to the excellence of equestrian performance and committed to the success of the fledgling USET. She was motivated by the energy of the founders’ commitment to the highest level of horse sports. Throughout the rest of her life, she was dedicated to strengthening the USET through a great variety of ways, all of which our father strongly endorsed.”

Joan would eventually go on to serve as a Trustee from 1976-1984 and was then named an Honorary Trustee. Mr. Hamill, “Corky,” served on the Finance Committee during the same period. Their daughters, Betsy Bramsen and Nancy Winter, were both involved in Eventing competitors for several decades. Nancy trained at Hamilton Farms as a short listed member of the 1984 Olympic team. She described this experience as an “extraordinary opportunity, particularly due to the history and elegance of the facility.”

Nancy, Betsy and their brother, Jon, have made this incredible gift in memory of their parents, who were dedicated to the success of our United States Equestrian Teams. “She [Joan Hamill] saw the spirit of the Team,” said Nancy. “There was, and still is, a generosity of people with expertise giving so much time to the equestrian community.”

“The Hamill family’s leadership gift of $1.5 million to the USET Foundation’s Gladstone Fund is truly appreciated and will have a direct and meaningful impact on the competition and training of our United States Equestrian Teams. This funding will be used to continue capital improvements ensuring Hamilton Farm’s status as a world-class facility for our athletes and teams. Joan Hamill was a true leader of the USET in its early years, and it is so fitting that her legacy will be a permanent part of the iconic facility, which continues to train and prepare our riders for international competition. We are proud to name the rotunda, ‘The Joan and Corwith Hamill Rotunda’,” said Tucker Johnson, USET Foundation President & CEO.

In honor of the 100th Anniversary of the Hamilton Farm Stable (2017), the USET Foundation established “The Gladstone Fund” to preserve this important legacy and historic facility. The Hamilton Farm Stable is central to supporting the Foundation’s mission through providing a world-class facility for Olympic, Pan American and World Championship Selection Trials, National Championships, Training Sessions and special equestrian events and exhibitions. The USET Foundation’s headquarters and the High Performance division of the United States Equestrian Federation remain at the facility in Gladstone, NJ.