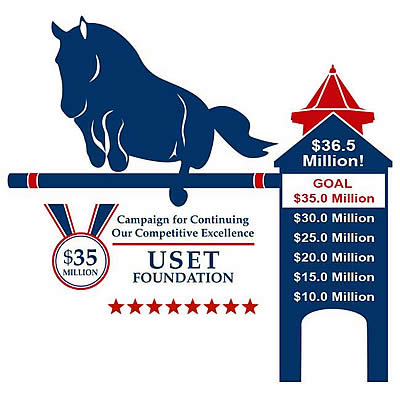 Gladstone, NJ – Feb. 4, 2016 – Thanks to the incredible generosity of donors, and the leadership of Campaign Chairman and USET Foundation Vice President, Jim McNerney, the United States Equestrian Team Foundation (USET Foundation) has achieved its goal of raising $35 million for the Campaign for Continuing Our Competitive Excellence. With a final total of $36,500,000 raised, the campaign has been a resounding success providing support to expand programs for developing and elite athletes and create new programs that will optimize this country’s ability to bring home medals at international championship events.

McNerney commented, “I would like to salute Bonnie Jenkins, our tireless executive director; Tucker Johnson, our dedicated president; and the generosity of Patti and Bruce Springsteen for a high energy, star spangled, Rockin’ Rio Gala finish to the campaign that put us over the top! Equally important was the tireless effort of all the trustees and the energized donors who stepped up when our sport and country needed them!”

The money raised from the campaign has been used to fund High Performance programs in all eight international disciplines, as well as support for the United States Equestrian Teams at the 2010 World Equestrian Games, 2011 Pan American Games, 2012 Olympic and Paralympic Games, 2014 World Equestrian Games, 2015 Pan American Games and the upcoming 2016 Olympic and Paralympic Games. Fundraising “Challenges” established for specific disciplines were instrumental in increasing funding for para-dressage, eventing, dressage and reining, as well as providing for the establishment of the new Human Sport Science and Medicine program.

The iconic facility at Hamilton Farms in Gladstone, where the U.S. equestrian teams once lived and trained under the great coaches Jack LeGoff and Bert DeNemethy, is undergoing renovations and capital improvements as a result of gifts made to the campaign for the Gladstone Fund. This will ensure that this world class facility will continue to be a vital part of this country’s High Performance programs through its use for training sessions, national championships and world championship and Olympic selection trials, as well as offices for the USEF’s High Performance staff and the headquarters of the USET Foundation.

The three main goals of the campaign were achieved; first, to increase the annual grant from the USET Foundation to the USEF for High Performance programs. In 2016 the largest grant of $3.5 million will be made, reflecting the strength of the campaign and being able to meet the needs of our teams as they prepare and participate in the Olympic and Paralympic Games this summer. The second goal was to grow the endowment, which increased by 86 percent, and the third was to expand the donor base at the Gold Medal level, which increased by 37 percent.

For more than 50 years, equestrian athletes have represented the United States in international competition, bringing home medals that have clearly established the United States as among the world’s equestrian elite. However, dedication, hard work and dreams alone do not bring home medals. The costs of fielding international teams are enormous. Training, coaching and transporting of human and equine athletes around the world in order to compete against the sport’s best athletes is a daunting undertaking, requiring a huge commitment of time and money.

The completion of the Campaign for Continuing Our Competitive Excellence will allow the U.S. to maintain this tradition of excellence and to remain competitive with the best in the world.