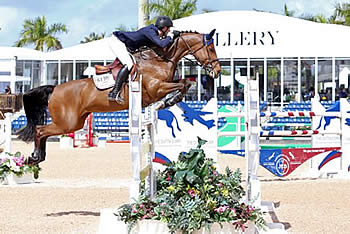 Wellington, FL – March 28, 2015 – The United States Equestrian Team Foundation is pleased to announce that 18-year-old Michael Hughes of Allendale, NJ has been selected as the 2015 recipient of the Maxine Beard Show Jumping Rider Award. Hughes was presented with the Maxine Beard Award trophy at the Winter Equestrian Festival Finale on March 28, 2015 at the Palm Beach International Equestrian Center in Wellington, FL.

The selection was based on Hughes’s competitive record and potential to represent the United States in international competition. Winning his first grand prix at just 16 years old, Hughes went on to win the 2013 USEF Show Jumping Talent Search Finals – East, as well as the 2014 Washington International Horse Show Equitation Championship. He claimed the 2014 Individual Young Rider Silver medal at the North American Junior and Young Riders Championship, and was most recently a member of the winning Young Riders team for the second year in a row at the CSIO Wellington Nations Cup.

“It means so much to win this,” said Hughes. “Looking at all of the past winners and where they are today is amazing, so it’s an honor to just be acknowledged for this award. I am really lucky to have the year I had and to have the horses that I am riding.”

The award provides Hughes the opportunity to be credentialed and travel with the U.S. delegation to the 2015 FEI World Cup Finals in Las Vegas, Nevada from April 15-19. He will observe the operations of an international championship, including the stabling area, veterinary inspections and schooling, and will walk the courses with the U.S. Show Jumping Chef d’Equipe, Robert Ridland.

U.S. Show Jumping Young Rider Chef d’Equipe DiAnn Langer has worked closely with Hughes over the last two years, and is thrilled to see his talent recognized with this award. “Michael Hughes is the real deal,” stated Langer. “He is incredibly effective on many types of horses, he is personable, he is serious about his work, and he’s successful in the equitation and the jumpers. I feel that he has a huge international future in front of him.”

Hughes noted, “I think it’s a going to be a lot of fun and be a great experience to be with Robert and DiAnn during World Cup Finals and get to watching an amazing competition.”

Hughes trains with his father Eamonn Hughes at their family’s Drumnacross Farm, as well as Missy Clark and John Brennan of North Run. This summer, he hopes to compete in Europe and also travel to Spruce Meadows. His goal is to one day represent the United States on a Senior Team internationally. With the talent, drive and determination to be a top-notch competitor, Hughes has proven that he will be a part of the future for show jumping in the United States.