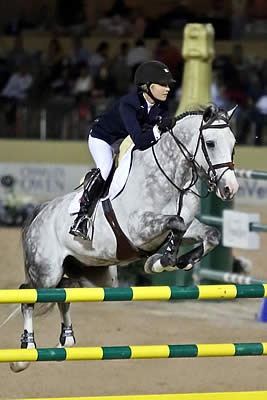 Lillie Keenan and Pumped Up Kicks.

The recipient of the 2015 Lionel Guerrand-Hermès Trophy is the talented show jumping rider Lillie Keenan of New York, NY. Each year this award is presented to a young rider in one of the Olympic disciplines who exemplifies both sportsmanship and horsemanship. In 2014, Keenan advanced to the highest levels of the sport, competing in her first Nations Cup in Bratislava and winning the Medium Tour 3* and a 1.40m class in Ascona. She has competed in five World Cup Grand Prix events and finished 5th at the National Horse Show against some of the best in the world. Keenan also won the Individual Gold medal at Young Riders in 2013.

No. 1 Driver in the World, Chester Weber of Ocala, FL, is the recipient of the 2015 Whitney Stone Cup. Winning the Silver Medal at the 2014 Alltech FEI World Equestrian Games in Normandy, France, and winning at Aachen, Saumur, Windsor, and Live Oak are just a few standouts from Weber’s outstanding list of accomplishments. His win at Live Oak made history by claiming his 11th FEI Four-in-Hand Horse USEF National Championship. The award is presented annually to an active competitor who displays consistent excellence in international competition and high standards of sportsmanlike conduct while serving as an ambassador for the United States and equestrian sport.

On January 25, 2015, the United States Equestrian Team Foundation announced the creation of the R. Bruce Duchossois Distinguished Trustee Award in honor and recognition of its distinguished trustee, Bruce Duchossois. The example he set for the equestrian community will live on in others as the award will continue to be presented annually to a USET Foundation trustee who exemplifies exceptional leadership, philanthropy and character. The USET Foundation presented the inaugural R. Bruce Duchossois Distinguished Trustee Award to Bruce’s family, who look forward to seeing his legacy live on through the organization that he supported throughout his life.