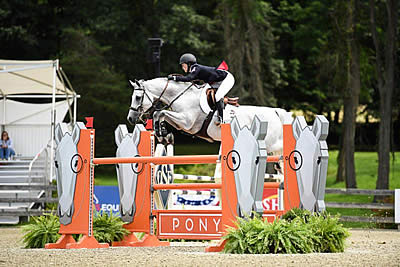 Gladstone, N.J. – Aug. 13, 2018 – The United States Equestrian Team (USET) Foundation is excited to announce this year’s recipient of the coveted Maxine Beard Show Jumping Developing Rider Award is Daisy Farish of Versailles, Kentucky. At just 17 years old, the accomplished athlete will be adding this prestigious award to her growing list of achievements.

Farish earned the award after being the highest placing United States Young Rider at the 2018 NAYC in the Individual Show Jumping Final, held this year from July 31 to August 5 at Old Salem Farm in North Salem, New York.

With the ongoing mission to support and further the level of America’s developing horses and athletes, the USET Foundation Maxine Beard Show Jumping Developing Rider Award was established to elevate athletes’ opportunities on their journey to equestrian excellence.

“It was really a dream come true,” Farish explained. “I have competed at NAYC for three years in the Junior division, so this was my first year doing the Young Riders division. It was such a nice show at Old Salem Farm. They did a really great job with it. It is been a goal of mine to be successful there for a very long time, so winning meant a lot to me.”

Trained by Andre Dignelli and the team at Heritage Farm, Farish rode her 10-year-old Holsteiner gelding, Great White, to earn a spot on the podium wearing the gold medal after her incredible performances over the course of a few days.

“I have had Bruce for almost three years now. I got him when he was a 7-year-old. We have really grown together and started jumping bigger classes together. It is a really cool feeling to progress at the same rate. He has been so amazing and just couldn’t have been better at Young Riders,” Farish said.

The top three podium spots were selected to go to compete in the Young Rider’s Nation’s Cup in Belgium in September, so Farish will be venturing to Europe shortly and is hoping for further success with the United States Young Rider Teams.

“I now get to take him to Belgium in about one month. I am really excited for that,” Farish said. “As far as the rest of the year, we will continue focusing on getting experience in some of the bigger classes. He is so brave and scopey, so he has been a really great horse for me to jump the bigger classes on.”

As the winner of this immense honor, Farish will also receive a trip to a FEI Nations Cup Show Jumping competition. This will give the young athlete a look at a major international competition including the chance to observe operations in the horse show office, stabling area, veterinary inspections and schooling rings. Farish will also walk and discuss each course and have the chance to strategize with U.S. team riders and the chef d’Equipe.

Farish acknowledged how having the support of the USET Foundation has benefited her as she continues on her path toward competing for the United States at the highest level of the sport.