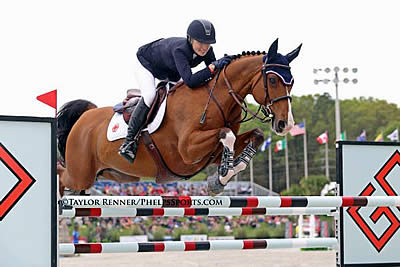 Wellington, Fla. – April 4, 2016 – The United States Equestrian Team Foundation is pleased to announce that this year’s recipient of the Maxine Beard Show Jumping Rider Award is Lillie Keenan. Hailing from New York, Keenan will be adding this award to her already impressive list of show jumping accomplishments.

The Maxine Beard award is presented to young riders who are talented in the sport of show jumping and also show great potential to represent this country in Nations Cup competitions and international championships. At just 19 years old, Keenan turned professional in 2015 while also furthering her education as a freshman at the prestigious Harvard University. Under the tutelage of Ireland’s Olympic Bronze medalist Cian O’Connor, Keenan adapted to a new training regime for herself and her horses.

“I really needed to challenge myself, and I always knew that I had a lot to learn, but now I feel like I’ve come a long way,” said Keenan. “I feel much more confident in myself than I did last year at this time, simply because I had new experiences, and I’m excited for continued change and trying new things, and trying to establish myself as a professional.”

One of Keenan’s most exciting opportunities this past year was beginning her training with O’Connor and spending the summer in Europe at O’Connor’s Karlswood Stables. Through her work with the Irish Olympian Keenan achieved top results in 2016, including third place finishes in the $380,000 Douglas Elliman CSI5* Grand Prix at the Winter Equestrian Festival and the HITS Great American $1 Million Grand Prix with her Super Sox, a 10-year-old Hanoverian gelding.

“I’ve taken a lot of time with that horse,” noted Keenan. “He’s a horse that I’ve always believed in. Three months ago, the team at Karlswood said, ‘You’ve put in all this work with this horse and you’re going to place in a night class in Florida.’ The fact that it came together is just a testament to the program, and also to how important it is to invest in the learning process and be patient with it. When you follow the steps and you put in the work to learn and have a special moment like that, it is really exciting.”

Along with the trophy, the award also offers the recipient the opportunity to travel to a Nations Cup competition to shadow the American team. In 2016, the Nations Cup events will have added importance, as the U.S. squad will be preparing for the Olympic Games in Rio later this summer. Keenan will observe the stabling area and veterinary inspection, and she will also be able to walk the courses with Chef d’Equipe Robert Ridland and the team.

“Our sport is not always team based, but at the highest level, you’re representing your country as a team, and that’s what I enjoy,” said Keenan. “To have the opportunity to shadow a team and get the experience of working with Robert Ridland and understanding the best American riders and their programs, and just being able to watch them ride and watch the work they do, is fantastic.”

Keenan concluded, “It’s exciting for me to receive this award because it’s an honor but also it’s a nice confidence boost at the end of season and now that I’m going to Europe. I especially want to thank the team behind Karlswood and of course my family.”