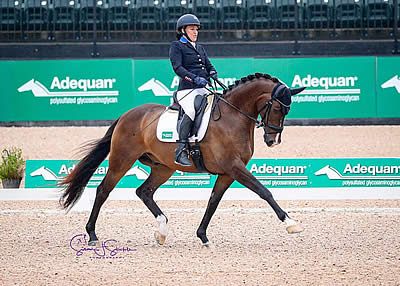 Hart and “Tex” claimed a win in the CPEDI 3* Individual Grade III on a score of 73.775%, but Hart revealed that the weekend was about much more than the current competition for her just a year following her double-medal achievements at the World Equestrian Games (WEG) hosted at the venue last September.

“This arena has so many emotions for me. I’ve had some monumental moments – the epitome of my riding career here. I rolled in to the venue on Monday and all the emotions came back,” she recalled. “And I was having the memory of meeting up with my parents – because my parents don’t get to come to shows that often, and my dad was here – and I was telling myself, ‘don’t get weepy, you just got in the driveway!’

“But revisiting the place where I saw my dad, and where I was waiting in the chute for the final rides when we realized I had gotten the bronze and the first medal ever for US Para Equestrian in a WEG, was just fantastic,” Hart continued. “To have Tex here again with me, and to have him perform so well for me again in this arena… Tryon has such a special place in my heart.”

Hart is now focused on 2020, and admitted, “We’re Dressage riders – we always want more and want to get that extra little tenth of a point that we can get anywhere! Heading into next year we’ve got a lot of little things to work on.”

But it was a significant change in routine that has helped deepen Hart and her mount’s connection, she detailed: “We had actually changed up our routine coming into this event, which was a little intimidating, because changing anything before a big championship can go one of two ways, but it has really worked for us. I now do all the warm-up myself with Tex, which has made for a much more symbiotic relationship with my horse.”

Hart elaborated, “Before, I had my trainer doing the warm-up, because I don’t post, so I liked to give him a bit of a warm-up with an able-bodied rider to get his back moving, but I always felt like there was a bit of translation period from the two rides, and I would basically have to re-warm him up all over again. And then, any issue they had would translate into my ride as well, so me handling him from the start myself makes it my own ride, and it gives us a lot more confidence in the ring.”

Trunnell and Dolton, the 2012 Hanoverian gelding (Danone I x Unknown) owned by Flintwood Farm LLC, claimed second behind Botana in the CPEDI 3* Individual Grade I test Saturday, scoring a 73.571%. “It was a wonderful weekend,” Trunnell said after the Team USA win. “We really have been working on solidifying them [our tests]. It feels like they’re really coming together. I love how he just kept marching.  We’re hoping to make it to Tokyo, so that’s what we’ll be working on.”

Collier and All In One grabbed third place in the CPEDI 3* Individual Grade I Competition to help earn the win for Team USA, and shared that she was impressed with her mount’s reliability in their first CPEDI competition together: “For this weekend, we wanted to come out, be consistent, and I personally wanted to work on my geometry. With him being as great of a horse as he is, I have to step up to his amount of talent! Being a visually-impaired rider, geometry can be one of the most difficult things to nail, so I’ve really been working at home on perfecting my step counts, because that’s how I do my geometry.”

Collier continued of the 2009 Hanoverian gelding (Abanos x Dauphin) owned by Going For Gold LLC, “Being here in the big ring with different lighting and situations, I was very impressed with how ‘Alle’ stepped up his game. He was like, I’ve got your back! Really, we had no idea what to anticipate going into our first CPEDI.”

Working towards Tokyo 2020 and hoping to be named to next year’s team, Collier emphasized that competing at TIEC has been a valuable learning experience for such a new combination. “[Going forward] I just want to work on fine-tuning the little things we’ve observed here. It’s been an amazing learning experience for us, and for only having him since mid-June, I think there is so much room to improve on so many things, which is just – I keep using the word exciting, but I don’t think it really sums up the feeling that I feel about our partnership. We connected so quickly, and I can’t wait for the future with him,” Collier concluded.

Shoemaker and Solitaer 40 presented solo once again in the CPEDI 3* Grade IV Individual competition, scoring a 73.049% and putting in what she felt were “personal bests” for her team this weekend regardless of scores: “I think this was really the best work we’ve gotten in the arena – we’ve been together for five years now, and every show has been a step in the right direction: we get it at home, then we get it in the warm-up, then we get it around the arena, and then we get it in [the arena], so I felt like we had some really amazing moments in the arena this week. So, that’s what I’m really excited about, and regardless of the scores, they were personal bests.”

“I just want to keep adding more cadence, self-carriage and balance into the work, so we can show the expressiveness that he has,” Shoemaker said of the 2007 Hanoverian gelding (Sandro hit x Dynastie x De niro). “There’s so much in there, and he’s just waiting for me to tap into it.”

The Adequan®/USEF Para Dressage National Championship will be streamed live on USEF Network throughout the weekend. Click here to watch.