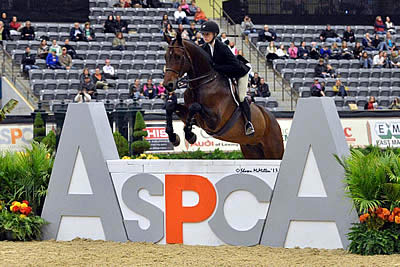 Lexington, KY – August 12, 2014 – The National Horse Show is pleased to announce that the USEF Network will be providing full live-streaming coverage of the 2014 events, including the Alfred B. Maclay ASPCA National Championship, presented by Dover Saddlery. Live commentators will be Brian Lookabill and Lillie Kennan, who took home the impressive Maclay victory in 2013. The event is scheduled for November 2, 2014 at the Kentucky Horse Park in Lexington.

Keenan of New York, NY has been at the top of the sport since she was a pony rider, and 2013 was an exceptional year for her career. It began with the 2013 North American Junior and Young Rider Championships Show Jumping Gold Medal, followed by her first grand prix victory at HITS-on-the-Hudson and a win in the USEF Junior Jumper Individual Championship. At the end of the year she took home the victory in the Pessoa/USEF Hunter Seat Medal and the ASPCA National Championship. This year, Keenan has been focused on the jumper ring, including representing the United States on the Nations Cup teams in Ascona, Switzerland and Bratsilava, Slovakia.

“I’m very excited because I’ve never done any commentary or live broadcasting so I’m looking forward to a new experience,” expressed Keenan. “Last year, after the Finals, I got to watch the replay of the whole class with Jacob Pope commentating and I think he did a wonderful job. It will be a really interesting experience to be on the other side as a viewer, but one I’m looking forward to.”

Brian Lookabill was the production manager of the National Horse Show in 2013, and is known as the voice of the show ring. Lookabill has been involved with the equestrian industry for over 20 years, and is currently a horse show announcer at the some of the top competitions throughout the country.

“While I’m looking forward to helping with production again this year, I’m also happy to return to the mic for some of our streaming coverage,” noted Lookabill.

“Not everyone can experience a big, championship event first-hand, and we’re lucky to share Maclay day with someone who’s been there. Lillie’s record is pretty unprecedented, winning in the Ponies, Juniors, Young Riders, and even Derby Championships before the Maclay. She’s obviously a dynamic rider who could very well be one of our next Olympians. She is also one of the most composed young ladies I’ve met, and I think she’ll bring some great insight to a historic class that many people only dream of riding in, much less winning.”

With $850,000 in total prize money and an important World Cup Qualifier, the International Open Jumpers will compete for $530,000 in prize money, while the top rated hunter sections have a total purse of $205,000. Meanwhile, $100,000 is offered to the Amateur/Owner and Junior Jumpers.

The fifth edition of the National Horse Show in Lexington, Kentucky, is set for October 28 – November 2, 2014.

The show will once again be held at the Kentucky Horse Park.