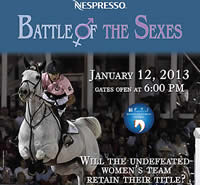 Lexington, KY – USEF Network coverage of the FTI Consulting Winter Equestrian Festival begins tomorrow night with the $55,000 Nespresso Battle of the Sexes. This event is the first in the “Saturday Night Lights” series of events and features Charlie Jayne and Georgina Bloomberg captaining a team of all male jumpers and all female jumpers, respectively. The team of women will be defending their title for a sixth straight year. The men’s team has never won the Nespresso Battle of the Sexes.

Over the course of the winter USEF Network is scheduled to broadcast 16 classes live from the FTI Consulting Winter Equestrian Festival. A full broadcast schedule is available here.

When & Where to Watch

Both classes will be streamed live at http://www.usefnetwork.com/featured/FTIWEF2013/.