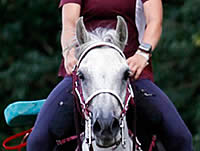 Lexington, KY – Following the approval of the USEF High Performance Working Group and the USEF Executive Committee, the squad and alternates for the U.S. Endurance Team for the 2012 World Endurance Championship is as follows.