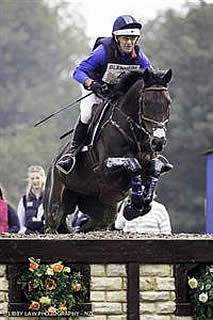 Dutton (West Grove, Pa.) and Tom Tierney and Simon Roosevelt’s 11-year-old Holsteiner gelding entered the final phase in ninth place but lowered the final three poles on course, resulting in 12 faults. The pair finished in 17th place on a score of 62.2.

“It’s only our fourth event together, and it was a really good weekend to get to know each better. He just got a little low there through the final three fences, so we’ll work on combinations back home,” stated Dutton after the show jumping.

Additionally, the Olympic and World Championship veteran finished in 36th place on a score of 96.6 with Tom Tierney and Ann Jones’ nine-year-old Irish Sport Horse gelding, Fernhill Fugitive, after collecting eight faults in the final phase. Katherine Coleman (New Orleans, La.) and her own 11-year-old Irish Sport Horse mare, Courage Under Fire, finished with 22 faults in the show jumping to close out the weekend on a score of 112.2 in 41st place.

Great Britain earned the top three spots as Francis Whittington and Easy Target collected the winner’s spoils on an overall total of 38.3, with William Fox-Pitt and Freddie Mac claiming second place on a score of 42.0, and Jodie Amos rode Wise Crack to third-place honors with a score of 46.8.