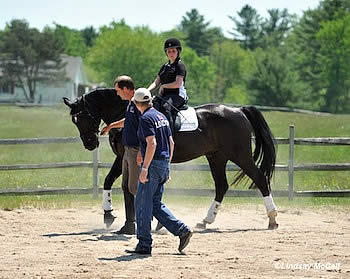 Wellington, FL – January 7, 2015 – The United States Equestrian Federation, Inc. (USEF) is excited to announce a two-day Para Equestrian Dressage Symposium to be held at Global Dressage, Wellington, Florida, January 12 & 13, 2015, 8 AM-4 PM. Select U.S. High Performance and developing Para- Equestrian Dressage riders and coaches will be attending the symposium. Auditors are welcome to attend for $75. Pre-registering as an auditor is not required. Please contact Laureen Johnson at USEF at lkjohnson@usef.org if you are interested in auditing.

Over two days U.S. High Performance and developing Para-Dressage coaches and riders will be immersed in the international equestrian discipline of Para-Dressage. Topics include Para-Dressage theory, scales of training, para-dressage test riding, quality of horse, freestyles, preparation for international competition, and much more. Demonstrations will be given from international athletes in each of the five para-dressage grades. Attendees will be given a deeper understanding of requirements and challenges that occur in international competitions such as the Paralympics and World Equestrian Games. Riders and coaches will be given lectures and demonstrations from top Para-Dressage experts including a seminar from international Para-Equestrian Dressage judge and trainer Kjell Myhre. Coaches will participate in collaborative coaching working together to bring out the best in their Para-Dressage athlete. Day One of the Symposium will be formatted as private sessions with Kjell helping riders to improve challenging movements of each grade level FEI test. U.S. Chef d’Equipe Kai Handt will simultaneously offer training feedback to Para-Dressage coaches in order to help prepare high performance athletes for International Level Para-Dressage Competition. Day Two of the symposium will include demonstration rides, test review and more collaborative coaching opportunities.

About Kjell Myhre: Kjell has a BA Hons Degree in Business Studies from University of Stirling, Scotland, UK. He started his career working for the City Council of Oslo, Department of Education. In 1998 he was offered a position as consultant for training and education at the Norwegian Equestrian Federation, and from 2000 to 2010 he had the position as Secretary General at the Federation. In 2011 he stepped down as Secretary General, and left the federation.

After three years working for a small NGO called Hest og Helse (Horses and Health), Kjell Is now back in the equestrian federation working as development consultant, mainly dealing with the riding clubs and their ability to contribute to the main objectives of the federation – equestrian sport for everyone!

Kjell started riding at the age of 12 and has competed nationally up to Intermediate I. He has been a dressage judge since 1990, and became a 4 * FEI judge in 2007. In addition to being a FEI dressage judge, Kjell is a 5* FEI Para-dressage judge, and has judged the last 4 Paralympics. Some of his highlights as a 4* FEI judge have been to judge two World Cup qualifiers, as well as the US Championships for junior and young riders in 2011, and the European Championships for junior and young riders in 2013.

He was an individual coach at numerous CPEDI3* from 2009-2014 for multiple riders earning multiple grade championships, overall championships, and as part of the U.S. Team, several Team Championships.

Handt was also an individual coach and sponsor at the 2010 World Equestrian Games in Lexington, KY.

Served as Chef d’Equipe at 2012 CEPDI3* in Wellington for the Japanese Team, coaching their rider to their first Paralympic Equestrian qualifying score.

Served as Chef d’Equipe at 2011 CPEDI3* in Mexico City, flying to the location prior to the competition to select horses for the U.S. Team. Held daily strategy meetings with riders and their coaches, and offered coaching assistance as needed resulting in a U.S. Team Nation’s Cup win, overall individual reserve champion, and individual Grade 1a and Grade Ib champions.

In 2013, Handt became the individual coach for Derrick Perkins, the first Para-Dressage rider from the United States Veteran’s Assistance Program.

Also in 2013, Handt was the individual coach for Para-Dressage riders Benjamin Harper, Roxanne Trunnell, and Derrick Perkins, as well as selector of appropriate horses for each individual at each show. All individuals achieved top scores ranging from 63.478%-73.478% during that show season.