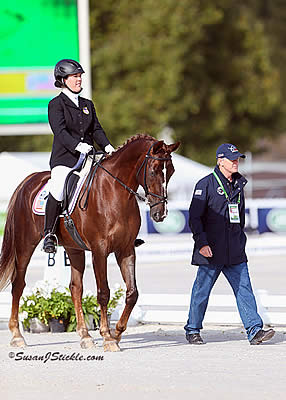 Wellington, FL – January 4, 2016 – Para-Equestrian Dressage riders from the United States are encouraged to participate in the USEF Para-Equestrian Dressage High Performance Symposium Develop the Coach Program held in Wellington, FL. The Symposium will include FEI International 4* Dressage Judge Carlos Lopes of Portugal and U.S. Chef d’Equipe Kai Handt. The symposium is scheduled for January 10-12, 2016, following the Adequan® Global Dressage Festival CPEDI3* January 7-10, 2016. The symposium will be held in the Van Kampen Arena at the Global Dressage Festival Show Grounds. Auditors are welcome.

The two and a half day Symposium begins at 2 PM on Sunday, January 10, with a welcome from Kai Handt.

Carlos Lopes will proceed with a lecture session on Para-Dressage theory, scales of training, quality of test movements, and much more. Monday, January 11, 2016, begins the practical sessions where each participant will ride for 45 minutes in a collaborative coaching model. This model includes each athlete’s coach in the session. Equestrians will enjoy learning alongside their own coach while preparing for international level Para-Dressage competition. The final day of the clinic includes an informative lecture, a practical session on freestyles and individual riding sessions.

USEF High Performance Director of Para Equestrian & Vaulting Laureen Johnson commented, “This symposium is an integral part of preparation for the 2016 Paralympic Team. All athletes who are vying for a Paralympic slot should participate. Mr. Lopes and Mr. Handt make a wonderful team and I’ve witnessed immediate improvement in the athletes after completing the previous Para Dressage Symposium in California.”

Carlos Manuel Lucas Lopes was born in Lisbon, on November 10th 1968, is married and father of two. He has been a rider since the age of ten and breeder of “Puro Sangue Lusitano” since 1998. Was one of the Escola Portuguesa de Arte Equestre (Portuguese Riding School) riders.

National Team manager and head of Dressage teams (Grand Prix, junior and young riders) since 2005. He has, in this period, participated in 4 European Championships, 3 World Championships, 2 Olympic Games, and 1 World Cup. He is a member of the Portuguese Equestrian Federation Technical Committee since 2005.

Has had several invitations to speak and take part in expert commissions and also in public forums organizes to promote the different equestrian disciplines and all kinds of subjects related to organizing equestrian shows and Lusitano breed. Carlos has tutored, on invitation, equestrian skills perfecting practical courses, worldwide, especially in Germany, EUA and Brazil.

Has managed 5 equestrian centers, of which the Academia de Dressage Daniel Pinto is the most remarkable, for being one of the best equestrian centers in the world. Presently, and for the last 18 years, he manages the Centro Equestre da Quinta do Senhor da Serra, with a team of 4 monitors, teaching over 200 lessons a week.

He has trained athletes of several age categories and has achieved remarkable results both in European, as well as in and World Championships. Never won an international event, but that is one of major aspirations.

He has established a solid career as Judge, for which he has been granted effective recognition by all of the most important international institutions, resulting in invitations to judge in the most important Dressage and Para Equestrian events all over the world.

Organized several Dressage, Para Dressage and Show Jumping events. Amongst such events, the 1st European Para Equestrian Championship, in 2001, and the European Dressage Championship for junior e and young riders, in 2008, 7 Iberian dressage cups finals (CDIs3*), CDI5* Al Shaqab, Doha, in 2013, Dressage discipline manager for the Madrid Horse Week, in 2014, selected in partnership with Dr. António Chaves de Almeida, among other companies in the world for the computerization of Dressage competitions at Sea Games, Thailand, are the most remarkable. He has also been responsible for the organization of over two dozens of National Championships and Portuguese Cup Finals.

Lusitano breeder since 1998, has been dedicated to the development and improvement of this race towards sporting excellence in order to get horses with the potential to participate and compete for prizes in the highest international competitions. This is a work of care and time, but you have already obtained the best results above expectations.

Kai Handt is the USEF Para Equestrian Dressage Chef d’Equipe, and most recently served in this capacity at the 2014 World Equestrian Games. As a rider, trainer, and clinician, Kai’s illustrious equestrian background includes coaching and sponsoring para-dressage riders at the international level for the past several years. Among his accolades are

*           Chef d’Equipe at 2012 CEPDI3* in Wellington for the Japanese Team, coaching their rider to their first Paralympic Equestrian qualifying score.

*           Also in 2013, Handt was the individual coach for Para-Dressage riders Benjamin Harper, Roxanne Trunnell, and Derrick Perkins; as well as selector of appropriate horses for each individual at each show. All individuals achieved top scores ranging from 63.478%-73.478% during that show season.