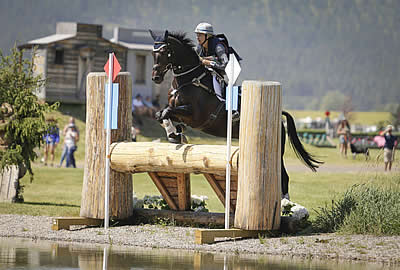 The impact of the USEA Foundation can be felt throughout the 2019 USEA American Eventing Championships (AEC) taking place this week at the Kentucky Horse Park in Lexington, Ky. From educational seminars available to all attendees to the very horses and riders themselves, the USEA Foundation plays an important role at the USEA AEC.

The USEA Foundation, formerly the USEA Endowment Trust, is an independent 501 (c)(3) established in 1991 to benefit the USEA and its members. The fundamental mission of the USEA Foundation is to protect and preserve the sport of eventing for future generations and to provide support for the core educational, safety, and equine welfare programs of the USEA.

Originally established to raise funds to build the USCTA (now USEA) headquarters in Leesburg, Va., the Trust evolved into an organization focused on building long-term reserves for the security of the USEA, providing support for the USEA’s educational programs, developing and administrating a number of different grants, and funding safety and equine medical studies and other strategic initiatives essential to the future of the sport. This evolution resulted in the transition from the USEA Endowment Trust to the USEA Foundation.

The Foundation now serves three primary roles for the USEA: it provides short-term assistance to the USEA in meeting financial obligations, provides a long-term financial safety net, and provides protection and growth for the USEA’s monetary assets. In addition to the roles the Foundation serves for the USEA, it also manages several funds — including the frangible technology research fund, the equine health research fund, and the Roger Haller educational fund — and provides USEA members with a number of different grants that benefit riders of all ages competing at all levels.

One of the many educational seminars taking place during the AEC is a frangible device clinic held by the 2019 USEA AEC course-builder Mick Costello. Attendees will have the opportunity to ask questions relating to frangible technology, from proper installation to the function served by different types of frangible devices. The depth and breadth of knowledge surrounding frangible devices is due in part to the work of the frangible technology research fund, which is invested in and protected by the USEA Foundation.

Several of the riders competing this year at the 2019 USEA AEC have been supported on their journey by USEA Foundation grants. Frankie Thieriot Stutes received the $50,000 Rebecca Broussard International Developing Rider Grant in 2018. This spring, she traveled to compete in the Luhmühlen CCI5*-L in Germany with her partner, Chatwin, where, in their first attempt at the level, they finished in fourth place as the highest-placed American pair.

“I was able to use the bulk of my funds to go to Luhmühlen, and the remainder of my Broussard grant money will make it possible for Chatwin and me to get to Kentucky to compete at the AEC, which is an amazing building-block in our partnership,” explained Thieriot Stutes, who lives in California. “It’s giving us an opportunity, where we otherwise wouldn’t be able to afford to make the trip to Kentucky to compete at such a world-class venue on Derek di Grazia’s courses.”

In addition, Thieriot Stutes will be using a Tex Sutton flight she purchased through the USEA Foundation silent auction at the USEA Annual Meeting and Convention in 2018. “It’s neat, because I was really excited to buy the flight to support the USEA Foundation, not knowing what I would use it for,” she said. “It’s come full circle, and I’m excited to be able to support the Foundation and have the opportunity to fly Chatwin on Tex Sutton to compete at the AEC.”

Madison Temkin, who is competing with Dr. Hart in the Intermediate Championship division and with MVP Madbum in the Preliminary Horse Championship division, received the $5,000 Amy Tryon Young Rider Grant in 2016 and the $6,000 Wilton Fair Young Rider Grant in 2018. She was named to the USEF Eventing 18 training list for five consecutive years since the program’s inception in 2014 and then to the USEF Eventing 25 list in 2019.

“The USEA Foundation grant has given me the opportunity to travel to the East Coast and not only compete at my first AEC, but also to continue east and base myself in Ocala, Fla., with High Performance coach Leslie Law,” said Temkin. “I am so grateful to have been a recipient of this grant, and I cannot wait for the next couple of months. The knowledge and experience I am going to gain is crucial to my career in this sport, and it will be a trip of a lifetime. Thank you so much to everyone who has believed in me and made this possible. I hope to make everyone proud.”

International five-star event rider Caroline Martin has a whopping eight rides at the AEC this year, including two in the Intermediate Championship: Danger Mouse and Cristano Z. In 2017, Martin was awarded the $10,000 Essex Grant, which is available to riders under the age of 25 competing at the CCI4*/CCI5* levels. Martin and her mount, Islandwood Captain Jack, were named to the USEF Development Pre-Elite Training List and represented the U.S. in the CCIO4*-S at Aachen.

In the winter of 2018, Martin used the grant money she received to travel south to train with Olympic dressage rider Bent Jensen. “I was with Bent for over a month, and I also got to ride some of his Grand Prix horses, which was really interesting,” Martin said. “This winter I got to go down for 10 days and work with Anne Kursinski in show jumping. I got to go do my first 1.55-meter Grand Prix with Cristano Z.

“Both experiences were really great for me. It was great for me to go and train with Bent and actually learn pure dressage and ride the pure dressage horses – it helped me with my tempi changes and my pirouettes. I got to live there and completely immerse myself. It was also great to go train with Anne, because I’ve never jumped that big, and it gave me a lot of self-confidence, especially when I went to Aachen this year and jumped in an arena that big. It really helped me take my show jumping to the next level.”

In addition to the training that Martin was able to undertake as a result of the grant, she’s also had the chance to transition her business from pure riding to encompass sales as well. Three of Martin’s AEC mounts — Redfield Bajall, Redfield Cheranimo, and Redfield Ideal — are sales horses owned by her business partners. “Since I got that grant, my business has changed,” she said. “I went from being just a professional rider to now being a salesperson and rider.”