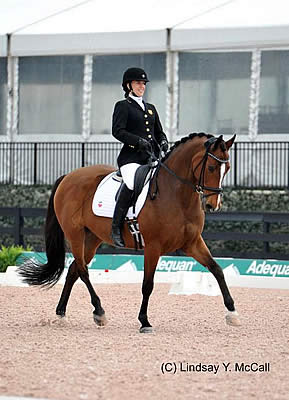 Wellington, FL – January 8, 2016 – United States Para-Dressage riders topped each of the five grades on the first day of the $10,000 CPEDI3* in Wellington, FL. FEI Para-Equestrian Dressage athletes from the United States of America, Canada, and Mexico are competing over the weekend in the 2016 Para-Equestrian Dressage Tour held in The Stadium at the Palm Beach International Equestrian Center, home of the Adequan® Global Dressage Festival (AGDF). Nineteen horse and rider combinations competed on January 8, in the Team Test competition. Earning the highest score of the day was Grade II Paralympian Rebecca Hart from the United States and Schroeter’s Romani, owned by Rebecca Hart in conjunction with Margaret Duprey, Cherry Knoll Farm, Barbara Summer, and Bill and Sandy Kimmel. Margaret McIntosh (USA) and her own Rio Rio topped Grade Ia, Sydney Collier (USA) and Western Rose, owned by Wes Dunham, earned the blue for Grade Ib, Angela Peavy (USA) and Lancelot Warrior, owned by Rebecca Reno, garnered first place in Grade III, and Mary Jordan and Rubicon 75, owned by Vinceremos Therapeutic Riding Center, took home the rosette in Grade IV. The $10,000 CPEDI3* presented by Mission Control, Mane Stream, courtesy of Rowan O’Riley, Adequan®, and Nutrena, is the first look at each horse and rider combination aiming for the 2016 Paralympics in Rio De Janeiro, Brazil. The Para Equestrian Dressage Tour includes the $10,000 CPEDI3* January 8-10, and the $10,000 CPEDI3* January 21-24, 2016. The FEI ground jury for January 8-10 includes President Kristi Wysocki (USA), Carlos Lopes (POR), and Marco Orsini (GER). Following the Team Test competition is the Individual Test on Saturday, January 9, and the Freestyle on Sunday.

The riders were tested on Friday not only on their FEI Dressage tests but on how they deal with continually changing weather that included sessions of pouring rain. The riders kept their focus while riding in the beautiful and large Stadium at the PBIEC. The atmosphere resembled many of the World Games’ atmospheres making this CPEDI3* perfect practice for the upcoming 2016 Rio Paralympics.

Paraylmpian Rebecca Hart commented, “I cannot thank Mission Control, Mane Stream, Rowan O’Riley, Adequan®, and Nutrena enough for hosting the show and putting us in the limelight where we need to be, especially in a Paralympic year. The venue has been amazing, the support crew has done an incredible job adapting our arena and having to change it from short to long; It’s been a wonderful experience and we are in the right atmosphere to get us prepped for Rio.”

Hart and Schroeter’s Romani earned the high score of the day with a 74.167% in Grade II. She noted, “I loved my ride today. We tweaked a few things from Texas and Nationals and she has been coming into her own in the last few months. The main thing was we went without stirrups, which is always a little scary, but it has really helped our connection, flow, and harmony. We have always had the power and expression but we wanted to make it smooth through the entire thing. With the condition I have there is a lot of spasticity involved and it’s a progressive condition. So as the years have progressed I have gotten more spastic overtime. When I would hit the stirrup bar, when I was riding with stirrups, I would spasm and I would basically become a human clothespin. Romani would hesitate because she knew my body so well. I was talking to some of the European riders that have been doing it with their tests and they said to take my stirrups off. We’ve been doing that for the last couple of months and this is the second time we have been showing like that. I think it has really helped smoothed out the picture. Romani is really happy with it, she accepts my leg, and it came off really well today.”

Hart like many Para-Dressage riders spent the summer competing around the world including Europe. “It was an amazing summer,” Hart smiled. “It was like ‘pinch me is this real’. Romani handled the travel beautifully. We were competing against all of the top European riders which gave us a good barometer as what we needed to fix and improve. We took everything we learned over the summer, had some really great success over there, and brought it home. Now we have been continuing to build on it.”

Hart continued, “I want to thank Todd Flettrich, Margaret Duprey of Cherry Knoll Farm, my groom Fernando Ortega, Barbara Summer, and Bill and Sandy Kimmel. Without them I wouldn’t have gone to Europe or competed here in Florida.

Before Hart moved to Florida she resided and trained in Pennsylvania alongside Margaret McIntosh. McIntosh earned the first place accolade in Grade Ia with her own Rio Rio with a score of 72.754%. “Today felt good especially coming from a disappointing show in Texas this summer. Texas was awful because the horses were in the trailer for two days and Missy (Ransehousen), my trainer, had chickenpox and she still managed to get there. She is the most loyal trainer ever. Rio was not herself in Texas. She was really sluggish all three days and spooked in the middle of the freestyle. Since then we have been working hard on her fitness. Kentucky Equine Research has made a diet specific to her, Missy has been riding Rio very forward, and she and Jessica (Ransehousen) are working together to make Rio her best. I also worked with Clive Milkins and he, Missy, and Jessica together were a powerhouse of information and slapped Rio into shape. Clive said that hard work, studying the basics of rhythm, straightness, harmony and balance have helped us. Just correct and accurate training. Having Clive, Missy, and Jessica on my team have been a great privilege. I can only hope Rio is just as wonderful tomorrow.”

In Grade Ib, 2014 World Equestrian Games Athlete Sydney Collier took the lead with Wes Dunham’s Western Rose. Western Rose competed in the 2012 London Paralympics with Donna Ponessa but this was Collier’s first international CPEDI3* with the mare. Collier stated, “Rosie was so fun to ride today. She has her own engine and she knows how to give me that forward impulsion. I just have to manage her gaits. That is the first time I have ever shown her and it’s not too shabby for the first time in the International ring with me.”

Collier continued, “I was so proud of both of my horses today. I couldn’t do any of this without them. Scampano’s warmup usually takes longer than it did today. I could have gone into the show ring after two minutes on him. He was great and his test came together very smoothly. Since competing in Texas at the CPEDI3* and National Championships he has really developed his quality of gait.”

Collier concluded, “It’s been really cool to work with such amazing talented horses and people. I am so thankful to Wes Dunham, Karen Ramsing-Bixler of KCR Dressage LLC, Allyn Maix of Choice of Champions, all of my other sponsors, my family, and Mission Control and Mane Stream. I am also enjoying showing in The Stadium ring. It is totally different than being under the covered arena. I love it. I went out there once with Willi Wesley so I knew the ring but it’s totally different getting to show in there. It feels like the real deal.”

In Grade III, 2014 World Equestrian Games Athlete Annie Peavy and Rebecca Reno’s Lancelot Warrior earned the top score of 71.360%. Peavy stated, “My team test was great. Lance felt very in front of me and was connected with me at a different level than he has been in the past. Our partnership has been progressing over the year and today he was soft and energetic. Tomorrow I will make sure the energy keeps going. I really love showing in The Stadium. It’s a different level of international competition which is exciting but you still have to concentrate though.”

Peavy’s family Mission Control is presenting the $10,000 CPEDI3*. Peavy noted, “My parents are very supportive of everything I do and continue to help me follow my dreams. I want to thank them for sponsoring the show and everything they do with Lance and Ozzy (Ozzy Cooper). I also want to thank Mane Stream, Rowan O’Riley, my trainer Heather Blitz, Alexia my groom, and Global for hosting us and being so nice and accommodating.”

Annie Peavy’s mom, Rebecca Reno, added, “We absolutely adore Global and Jimmy does an amazing job keeping these grounds beautiful. It’s perfect to watch the riders in the international arena because you can tell this experience will help get the riders ready for Rio.”

Rowan O’Riley of Mane Stream also added, “I am so proud to be a part of the Para-Dressage effort and I really admire the way these riders push the limits. I have had the pleasure of seeing Annie Peavy compete for a while and I have worked with Mane Stream in NJ and their therapeutic riding center. My own daughter has cerebral palsy and she became able through her riding. I am getting to know all the riders and their horses and they have beautiful quality in their horses and the riders are excellent riders.”

The Adequan® Global Dressage Festival is the world’s largest international and national dressage circuit featuring seven CDIs, including four CDI-Ws, one 4* and one 5*, the only non-championship CDIO Nations’ Cup in the Western Hemisphere, as well as weekly U.S. National events. The AGDF offers more than $650,000 in prize money for the seven international competitions, making it one of the richest circuits in the world. The Stadium at Palm Beach International Equestrian Center facility includes the Van Kampen covered arena (made possible by Kimberly and Frederic Boyer and family) and four outdoor arenas with world-class footing, 200 permanent stalls, and a VIP seating area. For more information, please visit www.globaldressagefestival.com.